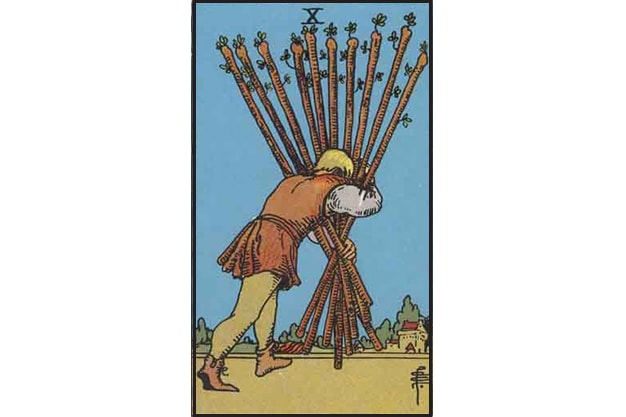 pain, ruin, failure all as a result of oppression

Visual Description of the Ten of Wands:

A man is weighed down by ten wands. He is carrying them to the town close by. He has come a long way and the wands have grown heavy on his back, but his destination is in sight and he is not about to give up, even though the wands on his back are digging into him, causing him pain and discomfort. He continues though, knowing he will soon be able to put the wands down.

Divinatory Meaning of the Ten of Wands:

Upright Meaning of the Ten of Wands Tarot Card:

The Ten of Wands is a card of oppression. As the wands are weighing down the man, so too the querent feels weighed down by some external force. If however the querent remains strong for a short while longer they will reach their goal and be able to escape the pain and ruin they currently feel.

“You are undergoing a very trying time. You feel unheard and overworked. There is something paining you constantly and you feel as though you are at the verge of ruin. But now is the time to remain strong. This is the final obstacle you have to face before you gain your freedom.

Build up your inner reserves in the knowledge that your goal is just around the corner. It may be tempting to escape by putting down the load and starting something new, but that will mean undergoing the same obstacles as you already have. The road has been long, but trust in the Universe. Soon you will be able to look back at all you have achieved with pride.”

The querent may be very tempted to escape the oppression at this stage. This is the final and most difficult obstacle to overcome before they reach success. As such they are urged to continue despite the pain they feel. Giving up will ensure that they are ruined because they will not have the strength of character or mental stamina to undertake another journey such as the one they are currently on. This opportunity for growth and expansion will forever elude them.

Reversed Meaning of the Ten of Wands Tarot Card:

The Ten of Wands reversed suggests that the querent is eluding a challenge. They think they are being smart by trying to trick the oppressor, but they live under a veil of misplaced hope. They are creating an air of mystery for themselves which is contradictory to what is really transpiring around them. This is a dangerous path to head down.

“You think you’re clever by making up plans to escape responsibilities, but all you’re doing is sabotaging yourself. This may sound harsh, but you need a wake-up call before it’s too late! What are you running away from? And where is this taking you in the long run? You need to realize that what you’re running away from isn’t really that bad. It’s an opportunity for you to grow.

By running away from your responsibilities you are creating a contradiction in your life. You are pretending that everything is okay, when in reality it isn’t. You need to face this challenge head on in order to grow from it and put it in your past. By acting mysterious you are robbing yourself of a chance to grow and become stronger. You are also ensuring that this obstacle remains. Only once you have faced what you are running away from will you truly be free of it.”

The querent needs to learn the lesson in the obstacle they are facing in order to avoid making the same mistakes in the future. They will perpetually be facing the same challenges if they don’t.