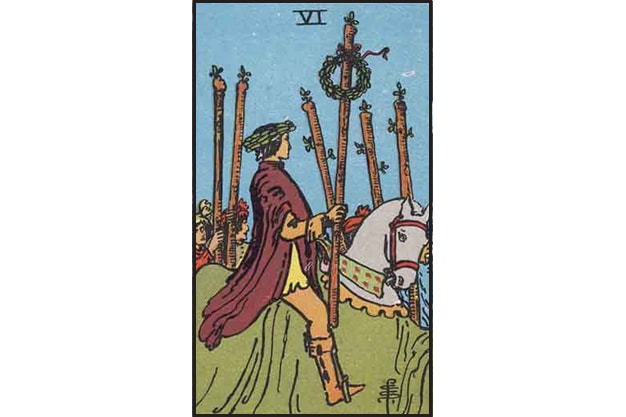 Visual Description of the Six of Wands:

A successful man rides his white horse through a crowd of cheering people. The white horse represents the purity and strength of his endeavours. In his hand he holds a wand with a wreath, the same as he is crowned with. The wreaths are a symbol of his success and abundance. The placement on top of the wand and his head shows that he attained his success through his ideas. The crowd is cheering him on, showing their recognition for his success and how he attained it, inspiring hope for him for the future.

Divinatory Meaning of the Six of Wands:

Upright Meaning of the Six of Wands Tarot Card:

The Six of Wands is a positive card for the querent. It shows their hard work has paid off and others recognise their success. This will in turn inspire hope in the querent, giving them the drive to carry on and create even more success in their lives.

“You have reached success and you’re getting the recognition you truly deserve. It wasn’t an easy journey, but you made it. The people that were there to witness your rise saw how well you handled the struggles you faced and they commend you on your efforts and the results you have achieved.

You feel inspired to create even more success in your life now that you know what you are capable of. The recent victory has given you more zest for growing your success and you can proceed on your endeavours with vigor. Nothing will stand in your way as you climb ever higher.”

The Six of Wands in upright position can also mean that the querent has received a message of sorts. This message regards the querent and the actions they have taken to overcome their challenges and reach their goals despite difficult circumstances. It is a message of congratulations and should be kept close at hand in the tough times that will inevitably come around again. It will serve as a reminder of the time the querent made it through a difficult time and keep them hopeful that they can and will do so again.

Reversed Meaning of the Six of Wands Tarot Card:

Reversed the Six of Wands suggests that the querent has achieved some success but they are scared to proceed or make others aware of their success. This could be due to double dealing on their behalf where they were disloyal to themselves or those involved in their success or fear that if they share the news others will give them a bad name. Rather they prefer to keep their pride and riches to themselves.

“You made something, but not in a good way. Your tainted riches are leaving you fearful that you’ll receive bad news soon. Getting something in a disloyal way means you’ll forever be looking over your shoulder to see if someone is going to come snooping around or call you out on your devious ways.

Living like this will make you proud of your success, but extremely insecure about sharing your success with those around you. And that is no way to live. It’s time to get back on the straight and narrow. Leave the devious dealings of your past behind and start living a life you can truly be proud of.”

The querent may feel as though doing things the right way won’t lead to as much success, but they should bear in mind that they are hardly living a fulfilled life if they are constantly living in fear. By changing their ways and finding a more socially acceptable way of attaining success they will be able to share their joy with those around them.