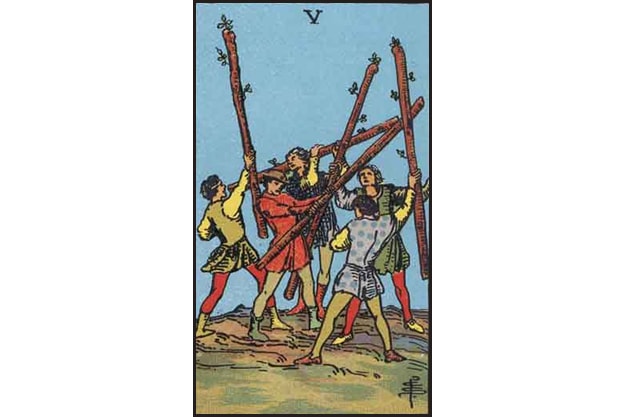 Visual Description of the Five of Wands:

Five men are brandish their wands. They all come from a different background as shown by the different clothing they wear. Each of them have their own idea of what is right and they are battling to see who’s idea will be victorious. This is a battle of wills rather than a physical battle. The men aren’t hitting each other, rather they are trying to determine who has the stronger wand, which represents ideas and energy.

Divinatory Meaning of the Five of Wands:

Upright Meaning of the Five of Wands Tarot Card:

As with all fives in the Tarot the Five of Wands shows that the querent is facing some kind of conflict. In this case the conflict is based on ideas. The querent is in the midst of a battle of wills which is impeding their progress. This conflict may be in the form of a healthy competition, or it may be more sinister such as false allies or an unfounded lawsuit.

“You’re going through a bit of a rough patch. You’re being challenged on a very personal level. Someone is making you realise that sometimes what you think is right isn’t necessarily. This can make you very angry at times, but it’s best not to play into this emotion.

At its worst this card indicates that you’re going through an intense time during which you’re not only questioning your own beliefs, but being bombarded by contradicting beliefs from others. This may take the form of an unfounded lawsuit in which you’re falsely accused. In another form it can represent someone who is ‘trying to help you’ but they only have their own best interests at heart.”

The querent needs to proceed cautiously. Nothing truly is as it seems at this time and one wrong move and everything they have worked for will come shattering down. They need to be especially aware of how they verbalise their thoughts, because it could leave them open for attack. It’s best to remain quiet and diligent at this time instead of getting caught up in petty arguments. The wisest course of action is to keep working toward their goals and leave the competition alone until they can prove their success.

Reversed Meaning of the Five of Wands Tarot Card:

Reversed the Five of Wands warns that the querent isn’t facing their opposition. They are avoiding conflict and as a result they are being taken for a fool. This can lead to contradicting events, such as people saying one thing, but doing another or serious legal matters if the querent keeps postponing the inevitable.

“There is something you’ve been avoiding for a while now. You were scared that it might lead to conflict, and now you know it will. But, if you keep on avoiding it, things will only get worse. You can’t trust the people this involves because they’ll be telling you one thing and doing another, trying to trick you so you can slip up. Which is even worse if the circumstances have reached a stage of going to court.

Your best bet right now is to change what you need to change, face this challenge and get it out of the way. You won’t be able to hide forever and running away will only make things worse. If you want this to go away you need to face it head on.”

The querent is advised to come up with a clear and precise action plan on how to confront and resolve the conflict they are currently facing. Then they need to muster their courage and follow through before things get worse.