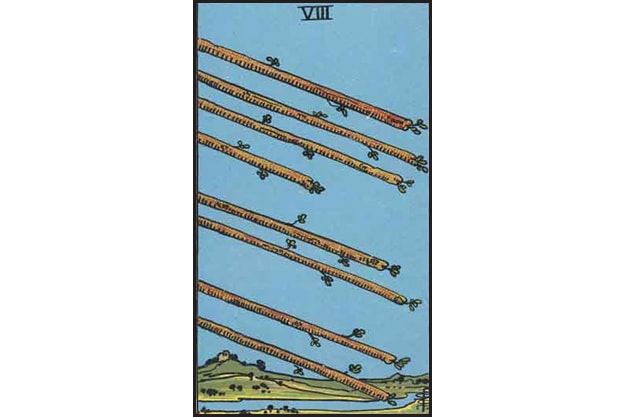 Visual Description of the Eight of Wands:

On this simple yet powerful card eight sprouting wands fly through the air. They are fertile and ready to grow, heading to their destination quickly. They are all moving in the same direction with great speed and there is nothing in the sky to stand in their way. Below the river feds the lush grass, a further symbol of fertility and growth.

Divinatory Meaning of the Eight of Wands:

Upright Meaning of the Eight of Wands Tarot Card:

The querent is filled with energy and fervour. They have new ideas that bring with them the promise of happiness. These ideas may include physical travel, but they can also mean spiritual travel as the querent explores new territories. There is also a promise of love with this card as the wands could be seen as cupid’s arrows. Whatever is going to happen it will happen quickly and with a promise of much growth.

“Something big is heading your way and it’s going to hit fast. But you don’t have to worry, it’s actually something to look forward to. You’ve been having a lot of great ideas lately and they’ve given you a boost of energy. Now is the time to harness that energy so you can catapult yourself to assured happiness. This may not be material gain, but it will improve your current situation remarkably.

The Eight of Wands could even mean that there is love on the horizon for you. Which is a major upside of this very positive card. But even if it isn’t romantic love you will definitely be much happier very soon. You may even decide to travel at this time which will help you to broaden your horizons and give you the opportunity to put your ideas into motion. Whether you decide to make this a spiritual journey rather than a physical one is up to you. Either way you will be heading toward happiness and contentment.”

The querent doesn’t have to decide to make any drastic moves, rather the forward motion represented by this card means all they have to do is go with the energy the Universe has already set in motion. They will intuitively know what their path to happiness is.

Reversed Meaning of the Eight of Wands Tarot Card:

Reversed the Eight of Wands has a much more sinister meaning. Here the wands are pangs of jealousy stabbing to the heart of the querent which will lead to fights that can become violent. After the incident the querent will feel remorse about their actions.

“You’re heading down a slippery slope! A situation has stabbed you with pangs of jealousy and if you choose to act on this emotion all that lies ahead for you is resentment and pain. Acting out will only cause fights, which could end up to be more violent than you anticipate. You might not think you’re claims are unfounded now, but in the heat of battle you know you always say things you don’t really mean… And then when all is said and done you want to take it back, but you can’t…

No, a much better way to approach any feelings of jealousy at this time is to see them for what they are, a feeling of inadequacy. And fighting about it won’t make you a better person. So, rather than jumping down someone’s throat, think of ways to improve yourself so you become a more well-rounded and secure individual. Only by becoming comfortable in your own skin will you be able to keep the ill will of this card at bay.”

It i of utmost importance that the querent take the importance of the warning of this card to heart. They can avoid a lot of unnecessary heartache and pain by adopting positive strategies to deal with jealousy instead of finding out that it would have been a better choice by doing it the hard way.