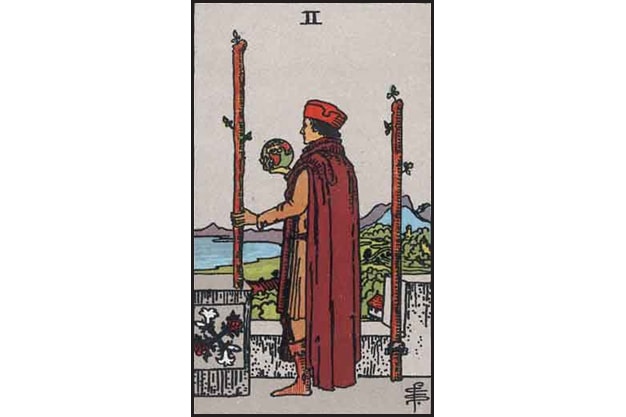 Visual Description of the Two of Wands:

A man cloaked in red holds a wand in his one hand, the other wand is secured to his castle wall. He is comfortable in his castle, but in his other hand he holds a globe, which represents the unlimited potential on offer if he could just bring himself to leave his refuge. But he is still contemplating what to do as he looks out over the fertile fields in front of him. In the distance the mountains serve as a constant reminder that there will always be difficulties to face. The man must decide how to proceed and whether the reward is worth the risk, or whether remaining confined to his castle will smother his zest for life and happiness.

Divinatory Meaning of the Two of Wands:

Upright Meaning of the Two of Wands Tarot Card:

“You have an idea, but will your plan work? Are you even sure that your idea will make you happy even if the plan does work? Are you unhappy with your current circumstances? Do you really want things to change? These are all questions you’re already asking yourself. Luckily the time to make your final decision hasn’t arrived yet, so you can still patiently sit and work out the details.

If you want to take the risk of leaving the familiar behind you want to be sure that your long term plan is solid and that you’re prepared for the fact that there will be obstacles along the way. On the other hand, if you choose to stay put, it’s wise to remember that without growth and expanding your horizons you may feel trapped in your life and become unhappy with it. Either way, your choice should not be resting on money alone, because wealth will not buy happiness in this instance.”

The querent is advised to take their time and contemplate the pros and cons of staying and leaving and making a decision based on what will serve them best in the long run.

Reversed Meaning of the Two of Wands Tarot Card:

In reverse the Two of Wands is bringing the inner world of the querent into question. Are they following the right direction or are they missing their Higher Purpose? This will bring confusion and scattered energy into their lives and as a result they will become fearful as surprises knock them off balance.

“Does it feel like the universe is conspiring against you? That’s probably because you’re ot on exactly the right path at the moment. You were hasty in your decision to follow a plan that wasn’t very well thought out and as a result you became so caught up in the enchantment of it all that you’ve lost sight of the bigger picture.

You’re not sure where you’re heading anymore and the surprises that the Universe keep giving you are a way for it to show you what your true path is. You need to take some time and contemplate exactly where you’re going and whether that’s the direction you truly want to be heading in.”

Once the querent has slowed down and adjusted their course their destination will become a lot clearer and they will have more patience to deal with the obstacles they need to overcome to get there.