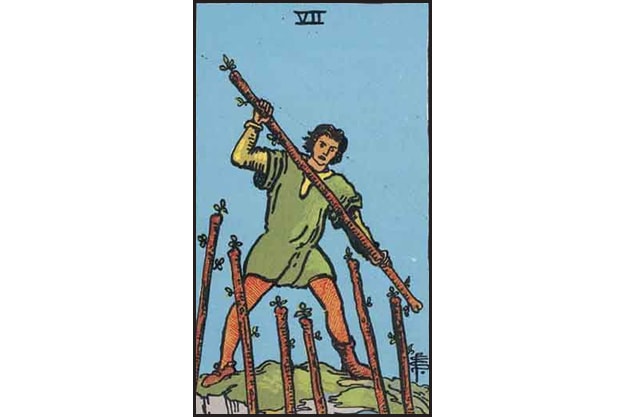 Visual Description of the Seven of Wands:

A man wearing two different types of shoes is standing on a hill defending what is rightfully his from six other wands. The two different shoes shows that the man was not planning on having to defend his territory and is ill-prepared and unsure of his footing. Further, the fact that the bearers of the six opposing wands are unseen further stipulates the fact that this is an unexpected attack on the man’s success. The man does however have the upper hand as he is standing on higher ground. He will win this battle if he doesn’t lose this advantage.

Divinatory Meaning of the Seven of Wands:

Upright Meaning of the Seven of Wands Tarot Card:

The querent is facing competition they did not bargain for and they have been caught off guard. They do however remain on the upper hand despite their ill preparation. Their success is at stake, but if they remain focused and well balanced they will find a way to overcome this obstacle. It will take a great deal of courage, but victory can be theirs.

“You’re facing some opposition at this time. Opposition you never dreamed of facing. In fact you’re not even 100% sure of what it is that you are facing and this is making you feel quite vulnerable. You don’t want to lose the success you’ve worked so hard for, but you’re not entirely prepared for what you’re up against either.

On the positive side your success and attainments have given you the upper hand in this situation and with a little bit of courage you’ll be able to reign victorious. So don’t give up, put up a good fight and victory will be yours.”

Even though the querent may be doubting their abilities to overcome this obstacle successfully they have what it takes to win. They will need to dig deep and tap into their reserves a bit, but overall the prospect isn’t dire.

Reversed Meaning of the Seven of Wands Tarot Card:

The reversed Seven of Wands is slightly more dire. In this case the querent is their own worst enemy. They are doubting their abilities and the validity of their goals. Their convictions have been brought under question and they are living in fear of embarrassment. This in turn is stirring feelings of anxiety about what the future holds and whether they are on the right path.

You need to remain strong in your convictions. But refrain from being too proud to ask for help if you need it. If you don’t ask for help your embarrassment may be bigger than the bit of embarrassment you feel when you admit that you need help. Now is the time to get things back on track by any means necessary. Even if that includes eating a bit of humble pie. If you don’t start working on a solution your negative thoughts and anxieties will only make the problem grow.”

It’s time for the querent to pick themself back up. Negative thoughts and emotions will be their downfall if they do not start to make an active change to their internal world. It may have been an external source that caused the querent to start doubting themselves, but it is nw their responsibility to prove that external source wrong instead of creating a self-fulfilling prophecy.