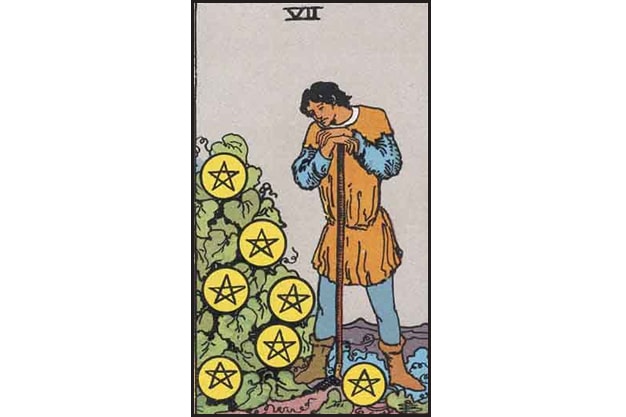 Visual Description of the Seven of Pentacles:

A weary, tired man leans on his hoe. He has put in many, many hours and his work has finally paid off! But was the effort worth the reward? Yes, there is a bountiful harvest and the man is proud of the reward his efforts yielded, but he is almost too tired to enjoy it. He was determined to get the job done and did so, but in the process he has depleted his energy levels.

Divinatory Meaning of the Seven of Pentacles:

Upright Meaning of the Seven of Pentacles Tarot Card:

The querent is facing a period of hard work and must determine whether the effort is worth the reward. There is a potential for development, but this must be weighed up against the amount of energy they have to get the job done. Once it is done they will have a substantial reward.

“You’re about to tackle a gigantic task and this card is asking you whether you’re sure you’re up for it. It’s not that the reward will be less than satisfactory, it’s that the amount of hard work and effort you put in might just make you so tired that by the time you finish you won’t have any energy left to enjoy the fruits of your labour!

So, make sure you’re well prepared before you engage in any endeavours during this time. Knowing what you’re in for will help you ensure that you maintain a steady and enduring work ethic that won’t leave you depleted and unable to function when it’s done. This card is a reminder that you can achieve great things when you put in the effort, but you have to ensure that you can keep up the pace without burning out.”

If the querent has already started this stage and they are feeling their energy run out they should make a concerted effort to take a break. Even if the task is not completed yet they will be much more productive when they are well rested than if they keep pushing themselves to breaking point. Burning out and failing to finish is a real possibility here. On the other hand, just because something is difficult and takes a lot of effort they shouldn’t give up completely. They just need to remain mindful of the balance necessary for a happy and healthy life. They will be rewarded at the completion of the project.

Reversed Meaning of the Seven of Pentacles Tarot Card:

Reversed the Seven of Pentacles shows that the querent is having trouble with progressing. It is as if the finish line is looming in the far distance and never comes closer. This makes them impatient and anxious to know when things will end. Slow progress can be frustrating, but they need to be reminded that all good things come in time.

“You’ve been working on this thing for AGES and it feels like you’re getting nowhere… This is frustrating and you’re becoming impatient to say the least. Then there’s also the worry that your project will never succeed, so you’re wondering if you should just give up and quit while you’re ahead.

But you’ve put in so much effort already! Won’t giving up now be more of a waste than just pushing ahead? You need to assess where you stand, what your goal is and how you can speed up the process a bit. That being said, you do know that all good things come to those that wait. So, a bit more patience will go a long way toward making you feel more at ease about the whole situation.”

The querent is urged to push ahead with the project as failure is not indicated here. Their efforts are not being wasted, this is just a timely process.