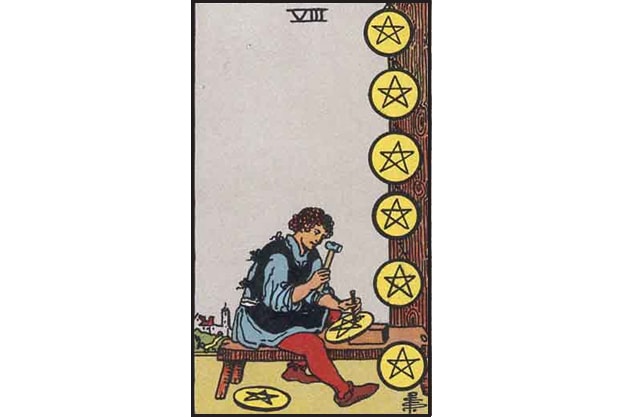 Visual Description of the Eight of Pentacles:

A young man is working to hone his skills on eight coins. He meticulously carves a pentacle into each one, paying careful attention to get it exactly right. No one from the village in the distance is in sight, he has removed himself from company to ensure he remains focused on his task. He wants to perfect the art he is learning and can only do so if he has no distractions. It is careful work he is busy with and he has to pay attention to the details.

Divinatory Meaning of the Eight of Pentacles:

Upright Meaning of the Eight of Pentacles Tarot Card:

The querent, like the young man depicted in the Eight of Pentacles, needs to take some time on their own to improve their trade or skill. They are employed or they soon will be and the more they learn and apply themselves the better they will climb the ranks and start earning more. Now is not a time to become complacent.

“You’re working and happy doing it. But focus isn’t something that is always a priority with you. This card however signals a time that you need to be focused. You’re at a crucial point where you can learn how to do something so perfectly that you become a master at it. But that’s going to take dedication and focus. You won’t learn overnight and you’ll have to keep doing the same thing multiple times. As a small reward you will be able to see minor improvements with each effort, which should keep you motivated.

The key is to remain focused and avoid any distractions as they will steer you off course or make this learning process take longer than it needs to. So switch off your phone, put a ban on social media and lock yourself up while you’re busy. The isolation won’t last forever and it will give you a chance to really get to grips with what you’re busy with.”

The querent must apply themselves to make the most of the capacity they have to learn and perfect new things during this time. It will stand them in good stead in the future if they can manage to perfect a skill now. This card could also point to learning a new skill or trade which the querent will have to practice meticulously in order to perfect. It will however be to their future benefit to do so now.

Reversed Meaning of the Eight of Pentacles Tarot Card:

Reversed the Eight of Pentacles indicates that the person has given up on making progress or becoming more skilled. They may have lost their ambition or they have grown weary of the hard work, feeling that it is just too much effort. On the other hand they may feel as though going through the process of learning something new is beneath them. There is nothing that will make them strive to better themselves and they are void.

“Why even bother? If it takes this much effort just to become relatively good at something why put in even more effort to get better? It’s not like you’re going to be the best at it, so you’d rather stick to what you know. Life is much simpler that way after all…

Well, if you don’t strive to better yourself how will you grow? You won’t be able to reach your full potential and you also won’t get the satisfaction of boasting that you learned something new. Who knows, you might even turn out to be pretty good at it if you just put in the effort.”

The querent needs to alter their mindframe into seeing the value of showing interest in something and learning new skills or perfecting old ones. They will stagnate without this drive for forward motion.