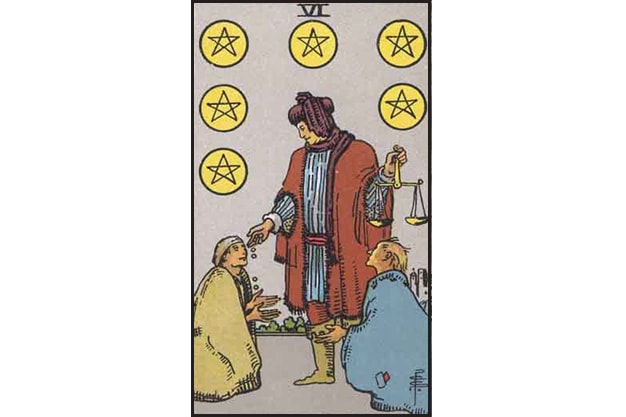 Visual Description of the Six of Pentacles:

Two beggars are receiving coins from a wealthy man cloaked in red. He is holding a scale to measure fairly, showing that things must be weighed up and shared equally among everyone. The wealthy man plays no bigger role in this card than the two beggars. He is merely on the giving end of the cycle of life at this time and he knows that in the future he may have to ask for help from one of the beggars, which is why he is ensuring that everyone receives equal amounts of riches.

Divinatory Meaning of the Six of Pentacles:

Upright Meaning of the Six of Pentacles Tarot Card:

In upright position the Six of Pentacles shows that there is a spirit of generosity in the querent’s life at this stage. Whether the querent is the one giving or receiving is unclear, but it must be kept in mind that the side they find themselves on is only true for the present moment. Therefore, if the are the one who is prosperous they may very well find themselves lacking in future.

“There is a cycle to life when it comes to wealth. Sometimes you have plenty and other times you struggle. It’s as though finances go through seasons too. You may be in the summer of your financial cycle at this stage, which means you’ve got more than enough to share, or you might be in a winter and your resources are depleted. In either event it’s always a good idea to share the wealth within a community as it offers more security.

People’s times of excess and lack rarely coincide precisely and sharing your wealth when you have it creates a type of social contract in which the people you shared with are often more than willing to share with you when you aren’t doing so well. This type of teamwork leads to communal prosperity as charity and gifts are given in the present moment as a tribute to those that helped bring them into existence in the first place rather than in hopes of receiving more in the future.”

The querent may feel guilt at taking “handouts” if they think they do not deserve them. They can rest assured that they are entitled to some gift or charity if they are struggling on their own. It is the definition of community.

Reversed Meaning of the Six of Pentacles Tarot Card:

The reversed meaning of the Six of Pentacles shows the negative emotions that can arise within someone in an environment where all is not equal or fair. The querent has to contend with jealousy, illusion and desire. As with the upright interpretation of this card these emotions could be felt by or directed toward the querent.

“Sometimes life isn’t fair, but a deliberately unfair environment is very hard to accept. When people find themselves in a situation where some are obviously favored above others it’s hard not to become a little bit jealous… Whether you’re the one they’re jealous of or you’re jealous of someone, remember that this is all an illusion. It’s impossible to weigh up one person’s life against another’s. How do you know who truly has it better or worse in the bigger picture? There are pros and cons to any situation…

So, when you’re caught in a jealous situation where desire is getting the better of good sense take a step back and try to think outside the “have-have not” box. There’s more at play here than meets the eye.”

This card shows up in a reading to remind the querent that the grass isn’t always greener on the other side and they should remain grateful for what they have.