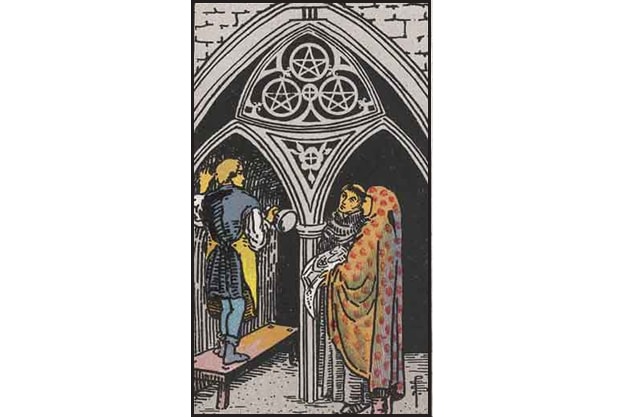 Visual Description of the Three of Pentacles:

A stonemason is carving three pentacles into the arch above a stained glass window. Two architects stand on the ground a few paces from his stool, admiring the work being done as well as delivering comment on whether it is in line with their plans for the cathedral. They discuss the progress with the stonemason, asking for his opinion even though they are more qualified than him, his expertise are still valued. The architects are encouraging his input.

Divinatory Meaning of the Three of Pentacles:

Upright Meaning of the Three of Pentacles Tarot Card:

Upright the Three of Pentacles is a positive indication that the querent is good at what they do. They may not be the most experienced, but they do have a certain level of skill which is gaining them approval from their superiors. Craftsmanship in this case refers not only to the traditional crafts, but can also include any other forms of work.

“You’ve worked hard and you might not have the most experience, but the time and effort you’ve put in are paying off. The higher-ups are starting to notice you and even ask for your opinion. This is thanks to your natural abilities and talents. You have a certain knack for what you’re doing and whether it’s taken you some time to figure out exactly what it is, or whether you just found yourself being able to do it, you’re being noticed.

Now is the time to hone your skills and become even more efficient in what you do. It will pay off in the long run and your superiors will see your devotion and reward you for the extra effort you’re putting in.”

The querent has an amazing opportunity to better themselves at this time. There is a lot of potential for success if they follow the right course of action during this time. They must however remember that they are the main catalyst of success in their lives and with this card there is a need for action otherwise their talents will be wasted.

Reversed Meaning of the Three of Pentacles Tarot Card:

The reversed Three of Pentacles indicates that the querent has wasted their talents and they are living a mediocre life filled with pre-occupational thoughts, dreaming about a life that could have been, had they only applied themselves and worked hard.

“You’re going through a period where you keep wishing you’d done more when you had the chance. Now you feel as though you’re stuck in a mediocre life doing something you’re not particularly fond of and thinking ‘what a waste, but it’s too late now’. Your unfulfilled ambitions are causing you to regret your past and resent your future.

There is something you can do to make things a little better… You can get a hobby that you love and live out your dreams through that. A more drastic approach would be to quit your job and start a new career, but that will take a lot of time and effort, so make sure you’re up for the challenge. It is doable though… The point here is to stop dreaming about what could have been and start making the right changes to make your life more fulfilled and meaningful to you.”

If the querent is still young or is starting a new venture this could be a waning that they are wasting their talents and foregoing their ambitions to follow a career that isn’t well suited to their passions. They now have a chance to make sure that what they’re attempting to do really is what they WANT to be doing. If there is anything they would rather be they should follow that course, before they end up regretting their decisions later in life.