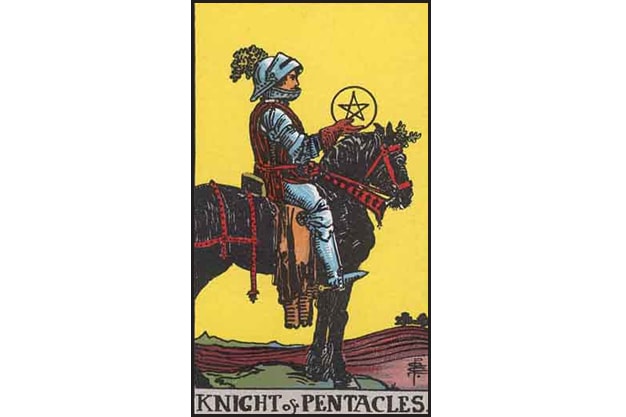 a person who seems dull, but is patient and responsible and shows interest, trustworthy

Visual Description of the Knight of Pentacles:

A knight sits on a huge draft horse. In his hand he holds a gold coin which he contemplates meticulously. He is in no rush to get anywhere and would rather be sure of what lies ahead before he sets off. He has laboured hard in the field behind him, meticulously ploughing row by row to ensure that the soil is ready for the next crop. Now he is contemplating his options carefully, considering each course and its outcome. He does not want to be met by any unexpected difficulties, but at the same time he is not afraid to face what difficulties may lie ahead.

Divinatory Meaning of the Knight of Pentacles:

Upright Meaning of the Knight of Pentacles Tarot Card:

The Knight of Pentacles may relate to the querent or someone in the querent’s life. This person may look dull and boring from the outside, but that is a misconception created by their good work ethic and patience. They like to know all the details before making a calculated decision. They may ask many questions, showing their interest, but opt out of something at the last moment because it presents too much of a risk. Once they commit to something they see it through with diligence and hard work even if the task is monotonous and boring.

“You are an extremely hard worker and you don’t give up until you’re satisfied that the task is completed to a high standard. You don’t do just anything though. You like to make sure that you know exactly what is expected of you before you start and if you aren’t up for it you back out. If however you agree to partake you will go to any lengths to make sure that the end result is as close to perfect as you can get it.

While other people may see you as boring you like to think of yourself as level-headed. You don’t make quick decisions and this has served you well. Despite being ‘boring’ others know they can count on you, you’re a loyal and trustworthy friend and colleague.”

If the querent does not relate to this meaning they should look for someone with these qualities. That person will bring out similar qualities in the querent, balancing their more ‘flimsy’ approach to projects. They will learn dedication and perseverance from the person represented by the Knight of Pentacles.

Reversed Meaning of the Knight of Pentacles Tarot Card:

Reversed the Knight of Pentacles likely points to the querent. They have lost all ambition and hope of attaining any type of goal. Their carelessness makes them irresponsible and consequently they are untrustworthy. This lack of caring also renders them stagnant as they see no point in trying to be more than they already are.

“You think of yourself as a failure, even if it is on a subconscious level. It brings about a ‘why even bother’ attitude and makes you neglect skills you have already developed. This probably stems from a low self-esteem, where something didn’t work out for the best and since then you just gave up even trying. Maybe someone keeps putting you down?

You need to move on from this sorry state. This card has shown up to tell you that you could be your own knight in shining armour if you just start believing in yourself again! You have amazing skills and potential, you just need to set yourself a goal and achieve it. Start small and work your way up from there.”

If this does not relate to the querent someone in their life may be facing this problem. They should offer support in the form of motivation and positive affirmation.