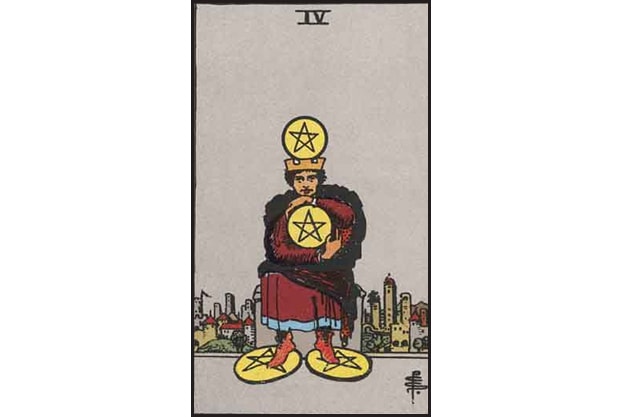 Visual Description of the Four of Pentacles:

A man clings desperately to a coin in his lap. He is afraid of losing what he has. Two more pentacles are half hidden between his feet as if he’s afraid of showing the wealth he has. The fourth coin is blocking his crown chakra; he is disconnected from the Universe as a result of his greed. In fact he is so obsessed with clinging to his wealth that he has forsaken all other relationships and activities. His hometown can be seen in the background, but there is no one else around to keep him company.

Divinatory Meaning of the Four of Pentacles:

Upright Meaning of the Four of Pentacles Tarot Card:

The querent has become obsessed with wealth and riches to such a degree that little else matters to them. They are selfish and greedy and will end up alone if they continue this behaviour. Although this card may indicate that they will receive an inheritance this is not for sure.

“You’ve accumulated some money, but instead of using it to spend better quality time with others you’re hoarding it all to yourself, refusing to spend any of it. It’s all good and well to save up some money for a rainy day or to buy something big, but refusing to spend any of it, and continuously obsessing over it is going t drive people out of your life. You need to let go of the grip wealth has over you.

Try easing up on counting every penny and losing your temper when people expect a bit more from you. This card shows that you’re so focused on making money and keeping it that you’re losing sight of the real pleasures in life. Money cannot make up for rich relationships. You need to start focusing on your Spiritual wellbeing a bit more than your material wellbeing at this stage. Ask yourself why you want so much money in the first place…”

If the querent is standing to inherit a large sum they should think wisely about what to do with it. Saving some is always a good idea, but pretending like they have nothing isn’t always a good option. There needs to be a balance between saving for the future and enjoying the present moment with those they care about.

Reversed Meaning of the Four of Pentacles Tarot Card:

Reversed the Four of Pentacles shows that instead of hoarding their wealth the querent is spending too much and soon they will run into financial trouble. It is the opposite extreme of the situation depicted by the upright Four of Pentacles. The querent will face an obstacle which could be a sudden accident, or it could happen gradually. They will however not have the financial means to help themselves out of the situation.

“You’re spending so much that it seems as though you believe money grows on trees. You might be earning enough to support this for now, but this card is a warning that you need to ease up on spending too much before you find yourself with no resources left in a time of trouble.

While destitution isn’t indicated here the warning that some obstacle is coming is very clear and you should rather start saving for a rainy day. Having money to spend is nice, but knowing you’re financially secure in the long run is even better. You don’t have to become a stingy prude, just make sure you really need the things you’re buying and don’t always go for the most expensive option if there’s a perfectly adequate one for less.”

The querent may be spending so much to look wealthy and keep up appearances. They should be reminded that a kind spirit and a good heart go much further than an expensive price tag.