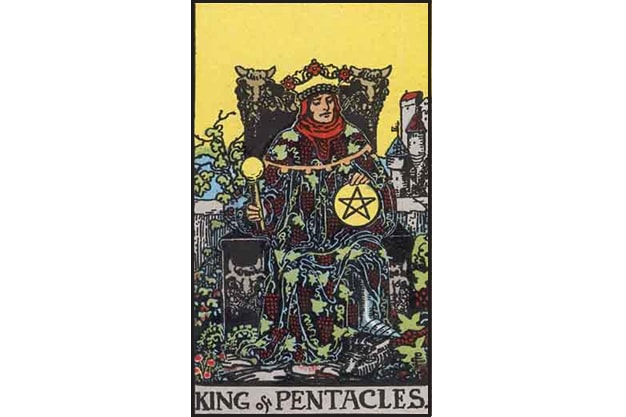 a reliable person, that is steady in business

a corrupt person who indulges in bribes, materialistic

Visual Description of the King of Pentacles:

The King of Pentacles is the ruler of all material wealth. He is connected to the astrological sign Taurus, ruler of money, as shown by the bull carved on his throne. On his robes the vines and grapes are a further symbol of his wealth, prosperity and abundance, an innate ability he has honed so he is able to manifest these easily and effectively. He holds a sceptre in his left hand, a symbol of his rulership and in his right is the coin which symbolises his connection to all material wealth. He is not only able to manifest wealth, but rule over his own impulses so as to hold onto is for an extended period of time. He is surrounded with further symbols of his success, including the vines, plants and flowers at his feet and the castle in the background. The latter of which is a symbol of security and stability.

Divinatory Meaning of the King of Pentacles:

Upright Meaning of the King of Pentacles Tarot Card:

Upright the King of Pentacles could indicate qualities within the querent themselves or someone in their life. This person has a strong sense of financial well-being and has worked hard to attain what they have. They do not squander their riches and rather invest or build for the future. This person has dedicated their life to attaining material success. They are reliable as they understand that reputation precedes people in power.

“You’re a hard worker, but you’re also smart. You work with your money instead of letting yourself go and spending it all. You know a good investment when you see one, thanks to your years of experience and this skill is paying off. You are reaching the epitome of material success and this makes you feel accomplished.

You know what’s important in business and one of the most important things is being reliable. You strive to keep to your word and this quality has spilled into your personal life as well. You rule your life through rigorous work and methodical application of your skills. Your hard work has paid off and you’re proud of what you’ve achieved and don’t mind boasting a bit.”

If this does not resonate with the querent there is someone in their life who has these qualities and will help them understand the basic fundamentals of success. If the querent learns these lessons well they will soon be underway to manifesting material abundance for themselves.

Reversed Meaning of the King of Pentacles Tarot Card:

Reversed the King of Pentacles shows the negative aspects of someone who is dead set on attaining wealth. This person has no shame in bribing others as they like to pertain to the same materialistic urges they find overwhelming themselves. They have not learned to curb their greed and will do anything to squeeze as much as they can out of a situation.

“You like money. You like money a lot. An unhealthy amount actually. While it’s true that a certain amount of financial security can make you happier you’ve taken this a step too far. And you seem to think that other people have this same obsession with wealth, so you try to get them to do your bidding by bribing them.

This lifestyle might work out for a short period of time, but soon people will leave you as they see that you have no interest in them, only in money. This card is a sign that you need to start thinking of the other aspects of life that will bring you more happiness. Wealth is a part of fulfillment but it is not the sum total.”

If this meaning does not resonate with the querent they should look out for someone who is going to bribe them into doing something they would not usually do.