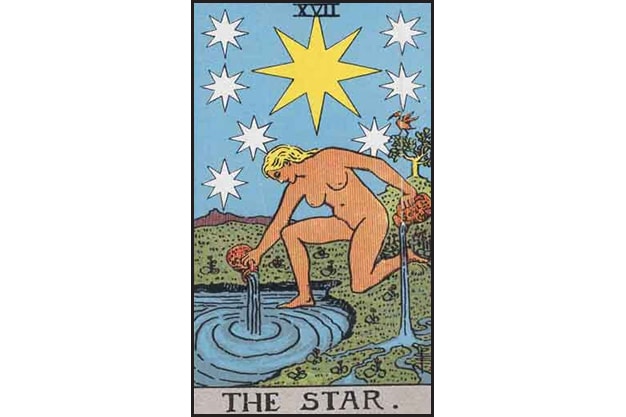 Visual Description of The Star:

The Star card shows a naked woman with one foot on solid ground and the other in a small pool of water, representing her common sense and intuition respectively. She is balanced between these as she is feeding both the pool and the land from the two water containers she holds. The one in her right hand represents her conscious desires to continue feeding the fertile pool, while the left represents her subconscious desire to turn arid earth into fertile soil.

She is naked. She cannot hide behind untruth and her vulnerability is seen by the eight stars shining behind her. The brightest represents her Highest potential while the others are indicative of her seven chakras. She is vulnerable yet serene in the knowledge that she is following her Higher calling by letting her conscious and subconscious energies flow.

Divinatory Meaning of The Star:

The Fool, and the querent, has come to a balance point after the destruction of The Tower he built on the false belief that he could either run from The Devil within by burying it in Temperance, or that this Devil could not be tamed. He is now restoring balance between his conscious and subconscious and letting his inner desires flow in order to nourish the world around him. This inspires hope and bright prospects for the future.

“You are finally standing in the nakedness of your truth. While this may make you feel vulnerable at times you know you are serving your Highest purpose by letting your energy flow through you. You’ve undergone a rough period, but you have emerged wiser and stronger. You’re ready to embrace all that you are and fulfill your destiny.

You are the magic in the world and you can make the differences you want to. The sky is the limit when this card shows upright in a reading, so let your mind go and follow your dreams. Let your intuition and common sense guide you like a Star through the darkness.”

The Star is one of the best omens in the Tarot Deck. If the querent follows their intuition and common sense they will be entering a period of abundance as their inner wellspring overflows and feeds the world around them. But it is essential to remain balanced in order for this period to last.

The Star reversed shows that the querent has little to no faith in their own abilities. They do not see how they are feeding the world around them. This negativity is actually causing the darkness around them and it will only turn to light once the querent finds inspiration and hope within themselves again.

“Your depressed mood is the only thing standing in your way. Self-doubt and self-sabotage is as a result of arrogance and self-involvement. You thought you could do it all without anyone else, but you were wrong and now you are paying the price. The imbalance has caused you to lose faith in your own abilities and as a result you find yourself alone.

You need to rebuild your self-respect and respect others enough to realise their worth. You have depleted your reserves and it’s time to start nurturing yourself and your life back to health.”

The querent may be in the beginning stages of this negative cycle. If this is the case they will be pushing people away, getting bored with their everyday routine and feeling a general apathy toward life. They are urged to nurture their spiritual and emotional well-being before the situation turns from bad to worse.