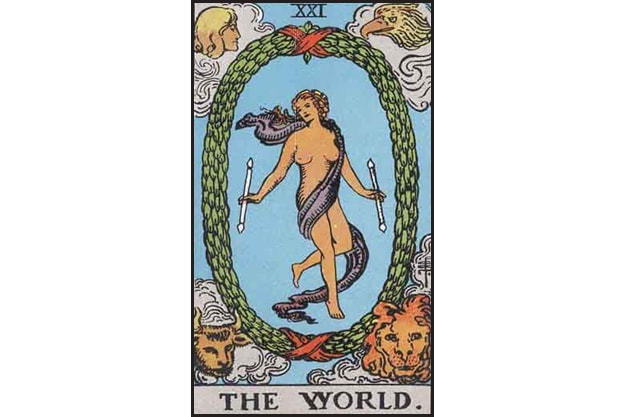 Visual Description of The World:

The World card looks similar to The Wheel of Fortune card. Both have the four winged beasts in the corners. The lion, bull, cherub and eagle represent the four fixed signs of the zodiac as well as the four elements and as such the four suits of the Minor Arcana. They represent the natural cycles of The World as well as the four seasons and how everything is connected flowing from one stage to the next seamlessly. They are also indicative of the four directions or corners of the world. Showing the direction life is taking.

In the middle of the card a woman cloaked in purple looks to the past as she moves toward the future. She’s holding two of the Magician’s wands. What the Magician called into being has been manifested, his incantation has been fulfilled. Around her is a circular wreath through which she is moving into the future. It represents the completion of one cycle and the start of the next.

Divinatory Meaning of The World:

The Fool’s journey has come full circle. He is now a man of The World and has achieved knowledge and wisdom of The World. A new cycle will begin shortly, but for now he’s enjoying the achievements and rewards of his success. The querent has also completed a journey of some sort and is basking in the glow of success.

“You have reached your goals and The World is your oyster. You have achieved success and your talents are being recognised by those around you. You have a feeling of inner pride and fulfillment. Congratulations and celebrations are in order before you start with the next journey.

You may also feel the need to travel at this time. Whether this is a vacation or a journey to a new life will depend on you. It may also suggest a Spiritual journey rather than a physical one.”

The querent has reached the epitome of success in a certain project or undertaking and they deserve to celebrate their success. They deserve this reward and it will not be pompous to indulge the feeling of joy they have for a moment or two before moving forward. Looking back and seeing how far they’ve come will give them courage and determination for the next journey.

The World reversed indicates that querent is stuck in the past. They keep looking back and clinging onto something that doesn’t exist anymore which is impeding their progress. The World is moving on but the querent is being left behind.

“You’re so close to reaching your goals, but for some reason you keep clinging to the past. Whether it’s an outdated belief or a sense that your goals will forever remain out of reach, it’s time to get up and finish this one project. It’s as simple as putting one foot in front of the other.

If you keep looking back and changing your mind about the future you run the risk of missing a lot of good opportunities. Plus, there’s nothing better than the feeling you get once you’ve completed something you’ve invested a lot of time in. So buckle down and get this obstacle out of the way so you can make space for bigger and better things.”

The querent may want to start a new project, but they should resist the urge to give up and push through to completion. Failure to complete the project at hand will only result in loose ends, which can become a permanent theme in their lives if they aren’t careful.