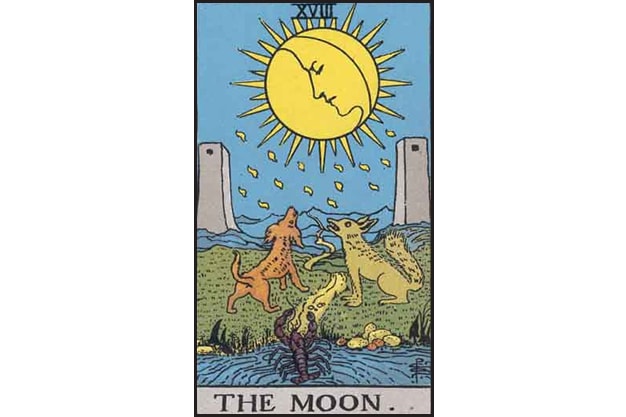 Visual Description of The Moon:

The Moon card shows a dog and a wolf howling at the full moon. The two animals represent the tamed and untamed animals within us. The dim light of The Moon illuminates the two towers, but the path to enlightenment isn’t as clear as with the light of The Sun.

Divinatory Meaning of The Moon:

The Fool’s journey continues as he realises that despite the hope The Star inspired there is still much about himself that he is not aware of yet. Similarly the querent is going through a period where they are aware that the light of consciousness is there, but the wolf and dog within them are hounding them. They are afraid of what remains hidden in the dark.

“The saying ‘know thyself’ is most applicable when The Moon shows upright in your reading. There is something buried deep in your subconscious that is affecting your life at present. It’s making you afraid of taking the next step. This is usually a past trauma that has not been resolved yet. By bottling up these emotions you’ve formed thought patterns and behaviours that help you avoid similar situations.

You need to delve into your subconscious through meditation, hypnosis or therapy to unearth the cause of your current fears. They are dimming the light of enlightenment and holding you back from experiencing the full spectrum of what life has to offer. Don’t fool yourself into thinking the little that you see before you is all there is to see. With a bit of introspection the path to true enlightenment will become as clear as day.”

The querent may be petrified of facing their subconscious for fear of unleashing the untamed wolf. But if the wolf remains unknown the querent stands a great risk of being devoured by it. Similarly the wolf may be afraid of being found and will hide away and attack when confronted. It is no easy task to delve deep into the subconscious and resolve the issues that are found there, but the reward of enlightenment and wisdom lie in the wake of this trying time so the querent is urged to proceed, but with caution and assistance if needed.

The Moon in reverse indicates that things are changing for the querent. They have undergone a trying time where they have fought against illusion and deception, but the veil is lifting.

“You’ve made some mistakes, you know this now. But the good news is that now that you can see what mistakes you’ve made you aren’t under the same deception as you were when you made them. Things are changing for you, at least on an internal level. You can expect a period of silence where you can contemplate your next move before it’s time to act.

While you have time before you need to act, things will already start changing for you, especially on an emotional and subconscious level. Things might not be completely clear yet, so take time to contemplate these changes and what they may mean to you. In time you’ll find the clarity that’s currently lacking.”

The Moon reversed is a sign that the querent needs to focus on their internal world and remain in touch with the changes occurring there. If they avoid it they will only be feeding the unruly wolf within, which will inevitably lead to emotional or spiritual upset.