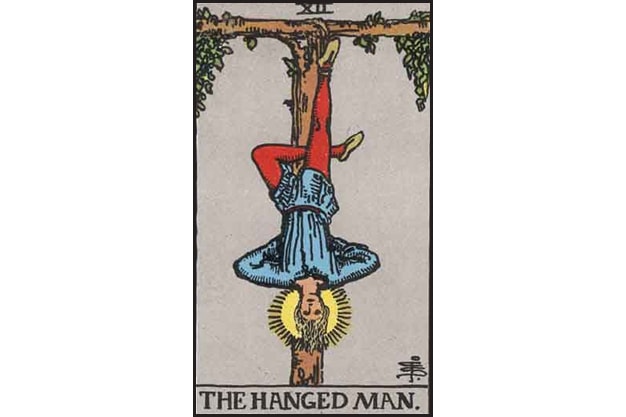 Visual Description of The Hanged Man:

The Hanged Man is hanging upside down from a growing tree in the shape of a cross. His whole world has been turned upside down as he can do nothing but hang from his right foot. He doesn’t struggle, suggesting that he is there by his own volition. His red pants are a symbol of human passion while his blue shirt represents his intellectual side. It is as thought the Fool, having experienced the first half of the obstacles of the Major Arcana his internal world has completely switched around. His ideals and hopes have been challenged to a point where he needs a break to recollect his thoughts. The halo around The Hanged Man’s head suggests that his thoughts remain pure and unadulterated at this time.

Divinatory Meaning of The Hanged Man:

Like The Fool, the querent is at a point in their lives where they need to take some time to reassess their surroundings and get a change of perspective. This should be a voluntary act on behalf of the querent and unlike The Hermit, The Hanged Man doesn’t retreat into their own world, rather they look at the world from a different perspective.

‘It’s time to take a break and hang around a bit. Sometimes it’s good to take a moment to stand still and just observe what’s happening around you. Looking at things from a different perspective can help you realise what hidden opportunities you’ve been overlooking. Our lives are rushed and routine orientated and when you become mired in the monotony of everyday life you can overlook some amazing opportunities. So take the time to relax.

While you’re taking a break make a point of looking at things from a different perspective. Growth can only occur when a problem is faced with a different mindframe than the one that created it, now is the perfect time to change the way you look at things.’

The querent may be facing some challenges at this time and will likely want to rush in, but a much better way to proceed would be to take a step back and look at the situation before just walking the same path they have always followed.

The querent is unwilling to take the break they need in order to see their situation for what it really is. If they remain stubborn their actions will have unwanted or unexpected consequences.

‘You’re either refusing to stop or struggling to move forward. Either way you need to start doing what you might find a little frustrating at this point… If you don’t want to take some time to take a better look at the situation remind yourself that some of the best “eureka” moments come at a time when you’re unwinding.

If you’re stuck try getting a different perspective. Go somewhere different, do something out of the ordinary. It will help unleash your creativity and give you some inspiration.

If you’re stuck in a relationship that isn’t moving forward set some boundaries for yourself and reinforce them. This indecision may also involve other areas of your life. While The Hanged Man is an indication that you should take some time out, reversed is an indication that some change of action is required or things won’t work out as well as they could if you took a good look at your environment and act accordingly. Trust your intuition, it will lead you. But be mindful of the various perspectives that are involved in the decisions you make.’