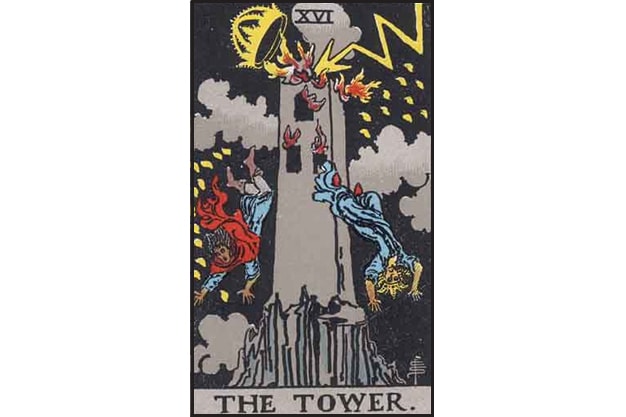 Visual Description of The Tower:

The Tower card shows a solid tower on top of a rocky mountain. It was built to be indestructible, but its foundations are shattered with a single lightning strike. Its occupants are falling into the abyss of the unknown. They thought they were safe, but a single surge of energy has, literally, knocked down their crowning glory.

The Tower card represents chaos and destruction through divine enlightenment. The 22 flames represent the 10 points of the tree of life and the 12 zodiac signs. This accompanied by the lightning, shows that sometimes false foundations need to be knocked down in order for more stable structures to be rebuilt in their place.

Divinatory Meaning of The Tower:

The Fool has run into a restructuring phase. He has learned that his shadow side must also be considered to build a strong and lasting foundation. What follows may seem to be a period of adversity and destruction as he is required to start from scratch, but he is more enlightened than ever before. The same goes for the querent.

“It feels like your whole life is crumbling around you. You’ve worked so hard and now everything is falling apart. You might be wondering what you’ve done to deserve this, but with a little thought you’ll soon realise that the life you had built was destined to crumble at some point. Your foundations were weak. You neglected to see the truth of the situation.

Luckily your illusions have been shattered. It may feel like a chaotic period where you aren’t entirely sure what’s real or what to believe, but it also represents an opportunity to build on a stronger foundation. That means that whatever you end up building next is much more likely to stand the test of time. Your ideals may be lying in shatters, but they were only an illusions. You can find some comfort in the fact that you will not fall prey to the same disruption again.”

The querent is reminded that even destruction has its place. They may be feeling abandoned by the Universe but they must keep in mind that the Universe has caused this Divine Intervention for a reason and good things will follow once the dust has settled.

The Tower in reverse points to the inner workings of the querent. They have gained some insight or enlightenment that is causing them to question how their external environment is working. It signifies a restructuring of beliefs which may leave the querent feeling trapped.

“Why are things the way they are? You’ve been wondering this for a while haven’t you… You’re busy testing the world around you and to a degree it’s making you feel like a prisoner, but you realise that it is your own mind that is making you feel trapped. You want to break down these boundaries and find fulfillment.

Or on the other hand you might think it’s safe in this tower you’ve built for yourself, but you’ll need to face this change at some point! If you can’t sense the changes that are happening or you’re avoiding them out of fear you are becoming your own captor. The only constant is change and it’s time to embrace it. So, let go of anything that no longer serves you before the Universe is forced to take it away from you. It will be for your own good, whether you choose to do it yourself or wait for the Universe to do it for you.”

Change is inevitable at this stage. If the querent refuses to make the changes themself the Universe will ensure the changes are made. This might be extremely uncomfortable, much more so than if the querent chooses to change for themselves. They are therefore urged to let go and restructure by choice.