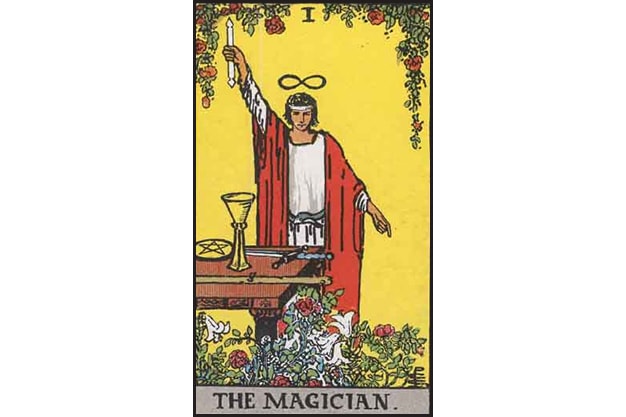 Visual Description of The Magician:

The Magician is the main inventor of the Major Arcana. He has the ability to make the ethereal real. This is shown by the way he points, one hand toward the sky, the other toward the earth. On the altar in front of him are his magical tools. These are all four of the suits of the Minor Arcana. He has the power and knowledge to weave his manifestation magic through all four of the spheres of life represented by the suits.

His apparel is equally important. He is pure, as his robe suggests, but this is covered by the worldly wisdom represented by the red cloak. His potential is unlimited, there is an infinity sign above his head and a snake biting its own tail around his waist to represent this.

Divinatory Meaning of The Magician:

The Magician shows up in a reading to remind the querent that they have all the necessary skills and resources to manifest even their wildest dreams. It means you can achieve whatever you put your mind to, as long as you persevere and realise the unlimited potential you’re harboring inside.

Even though it might look as though there isn’t much at your disposal, if you use your creative ingenuity you’ll be able to make something out of nothing. Your potential to manifest is astounding at this point in time all you need to do is remain confident and direct your energy toward your goals. This should be relatively easy as The Magician also symbolizes willpower.

If you’ve had any projects on the back-burner now is the time to put your energy into getting them off the ground or completing them. The Magician implies that you have a creative gift at the moment which will allow you to perform amazing things, as if by magic. You know just what to say and do to get what you want.’

Alternatively this card could point to an educated person in the querent’s life who possesses the qualities of The Magician. If the querent is well-disposed towards this person the relationship will be fruitful for the querent. If the querent feels at all dubious about the intentions of this person they should be on guard as they may get hoodwinked into a situation they do not necessarily want to be a part of. Remember, while  the intentions of The Magician may be pure, they have been through the trials of life and as such, it is not that they cannot be trusted, but a certain level of caution should be maintained. The person in the querent’s life who is represented by The Magician is not malicious, but they may see the querent as a means to an end rather than as a person with their own lives to maintain. That being said, the querent could also learn a lot from The Magician as long as they are careful not to become one of The Magician’s tools.

When The Magician shows up in a reading in reverse it’s a clear sign that there is a disconnect between the querent and the Universe.

It’s as if, try as you might, nothing seems to be going the way you thought it ought to. This will lead to a lack of self-confidence, and a general air of insecurity. The phrase “Why should I even bother..?” will resonate with you if you drew this card. Your creative powers are at an all-time low and everything seems pretty much pointless.

At its worst The Magician can point to mental illness when it is reversed. This can range from depression to more severe problems such as bipolar disorder or even schizophrenia. This does not necessarily mean that the querent is suffering from these disorders and is by no means a diagnosing tool. It could just mean that these tendencies are presenting themselves in the way the querent is looking at the world and their life. It might be time to consult an expert if these symptoms persist for an extended period of time, but it is nothing to be immediately alarmed about. It could just be a necessary phase in which you need to reframe things.’

The reversed Magician could also indicate a person in the querent’s life who possess the characteristics described above. If this is the case you are advised to be compassionate and not forceful when dealing with this person in case you aggravate the situation.

Everyone goes through ups and downs and the best thing to do when faced with The Magician reversed is to gently take care of and nurture yourself or the person indicated by the card.