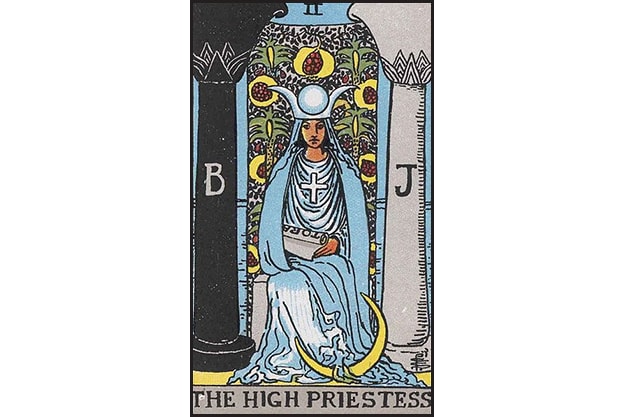 Visual Description of The High Priestess:

The High Priestess sits in front of a pomegranate curtain, representing femininity and fertility, but also keeps prying eyes from disturbing her peace. Only those who have passed the test may look upon her power. The pillars that hold up the curtain, one black with the letter B and one white with the letter J, represent the duality of life. The letters stand for Boaz and Jachin, which translates into “in his strength” “he will establish”. They represent the test that those who may enter the audience of The High Priestess must pass, namely the understanding and acceptance of the innate duality of life.

The High Priestess herself represents the Divine Feminine. Her blue robes are held together with a cross and on her head is a horned crown, which represent divinity. While at her feet a crescent moon represents all that is traditionally feminine, including intuition. In her lap she is half covering a scroll to show that the knowledge she embodies is in plain sight, but can also be hidden at times.

Divinatory Meaning of The High Priestess:

The High Priestess relates to the subconscious energies of the world. While she herself represents the Divine Feminine, you must keep in mind that she also represents the duality inherent in everything and therefore her energy is not exclusively feminine. That being said, she is the antithesis of the Magician. She represents the hidden mysteries of the Universe and the sacred knowledge that often remains unspoken.

‘As such, if this card shows up in a reading, it points towards a deeper understanding. You may feel as though you are learning something, gaining something out of an experience, but you can’t seem to explain how or why this is happening. This is your subconscious energies coming to light. You are more connected to your intuition and inner wisdom than usual.

If you’re looking for answers The High Priestess is a reminder that everything you seek can be found within. She urges you to take time out for yourself and connect to your Spiritual side again through practices such as Yoga or Meditation. Like the High Priestess doesn’t allow just anyone into her sacred space so you should create a sacred space for yourself where you can explore the mysteries within.’

The High Priestess is, foremost, a card that signals a time during which the Divine Feminine will play a large role in the querent’s life. It may represent a motherly figure who invites the querent to access their own compassion, intuition and inner knowledge, but usually it is a sign that the querent must access these qualities for themselves.

The High Priestess reversed indicates that the querent doesn’t trust their own intuition. This can lead to a myriad of other problems which manifest as a result of this disconnect between the conscious and subconscious minds.

‘You may be feeling as though other people know better than you do and as a result you’re being swept along the river of their lives instead of following your own course. This can be frustrating and cause you to act out of bitterness, making you more selfish in certain areas than usual.

Another result of ignoring your intuition could be misunderstandings. If you neglect your deeper Knowledge you act out of ignorance. These shallow responses could lead to upheaval if you’re not careful.’

Lastly, the reversed position of the High Priestess could indicate someone in the querent’s life who has a shallow understanding of the querent and therefore spreads gossip. This is not necessarily malicious, as the gossiper is unaware of their own ignorance, but they need to be informed of their misconceptions. In reverse the High Priestess represents the things that are hidden and unknown. It can cause a lot of damage if a person acts on suspicion instead of intuition. It’s best to focus on unmasking the veiled when the High Priestess is reversed in a reading.