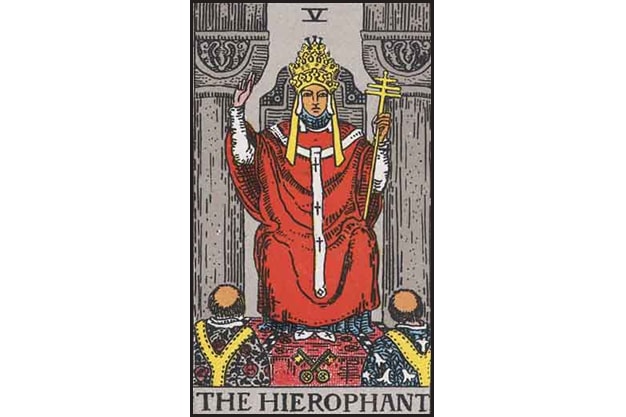 Visual Description of The Hierophant:

The Hierophant sits on a throne with two followers bowing before him. He is the male version of The High Priestess, a religious leader who is there, in his temple, to teach his followers his divine ways. His right hand is performing a religious blessing, pointing two fingers toward the sky and two to earth, showing that he understands how these are connected. In his other hand he holds a Palpal Cross, further signifying his religious aspect.

At his feet are two crossed keys. One unlocks the conscious, the other the subconscious. This connection and knowledge about the different consciousnesses of human existence is further illustrated by the three cloaks and the three-tiered crown The Hierophant wears. He rules over the subconscious, conscious and superconscious worlds that form the basis of human life.

Divinatory Meaning of The Hierophant:

The Hierophant heralds a time of religious or spiritual learning for the querent. It is most often indicative of a person that will guide or teach the querent, but in some cases the querent themselves may be the teacher.

‘The Hierophant is a Spiritual leader and you are about to feel the full effects of his mercy and guidance. You could find yourself exploring a new religion or Spiritual practice at this time, or you may be drawn to other conforming ideas and practices. Now is the time to become part of the crowd and follow the rules. After all, the rules have helped so many people in the past, they’ll help you too.

It might be that you’re guiding someone else who is a bit lost at the moment, but while you’re doing this you will be sharing traditions and the tried and tested method to get certain results. You will be forming alliances and looking for social approval instead of going out on a limb and doing something spontaneous.’

In the event that the querent is looking for Spiritual guidance they will find inspiration and mercy in whichever direction they choose to study or venture. Spirituality, like The Hierophant, encompasses all spheres of existence and is not necessarily religious in nature. The querent may be attracted to exercise, family values, nature or the occult at this time and they should be urged to follow their inner calling.

Reversed, The Hierophant can be a positive or negative omen. On the positive side it may serve as a reminder to the querent that everything they seek can be found within as they are, in essence, a Spiritual being that embraces all The Hierophant stands for. On the negative side the querent may be going through a period where they are challenging the status quo too much and this may lead to social insecurities and, at worst, being shunned by their support system.

‘The reversed Hierophant is challenging your beliefs. All the rules in the world that seemed normal and that you accepted are looking a bit silly to you. You’re asking yourself why you should conform. Aren’t most of these social norms outdated? Aren’t there better ways to do things? And in a certain sense you’re right. It’s time to challenge the status quo.

But while you’re challenging the beliefs of others you need to be consciously aware and understand that these people have built their lives on the beliefs you are challenging. They may fight back, which could lead to insecurities for both them and yourself. This is very unstable ground you’re treading on, so don’t alienate everyone at once.’

If the querent can maintain a state of understanding and acceptance of others during this time they will be primed to making some lasting changes in their own belief systems as well as the belief systems of others.