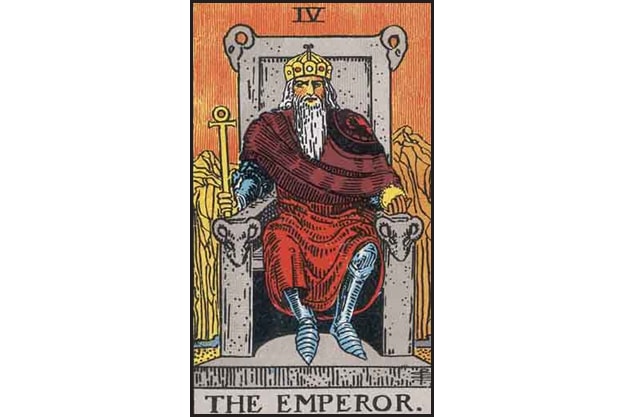 Visual Description of The Emperor:

The Emperor is the ruler of the world and all the life it holds. He sits on a throne, adorned with red, indicating the life energy that fuels his power and passion. On his head is a crown, representing his authority. In his left hand is a scepter shaped like the Ankh, the Egyptian symbol of life, in his left he holds the world. It is what he rules over with his wisdom and experience, which are represented by his white beard. Underneath his cloak the armor shows he is ready to meet with any threat that may present itself.

In the distant background loom the mountains that represent his immovability. When The Emperor decides something it will happen that way. The only respite in the austerity of his countenance is the small river at the base of the mountains indicating that despite everything seeming to indicate otherwise there is an emotional side to The Emperor if anyone should try and dig deep enough to find it.

Divinatory Meaning of The Emperor:

The Emperor, as the name suggests is the ruling patriarch of the Major Arcana. He is, in many ways, as much the father figure as he is the dominating force behind the laws that govern society. Traditionally masculine qualities are attributed to this card, but with the changing gender roles of today this card pertains to both men and women.

‘You are being asked to act as the father in your family. You feel a great responsibility toward providing for your loved ones and making sure they are safe. This could put a lot of pressure on you, but you will live up to the demands of the task. It’s your job to make sure everything runs smoothly and your foundations remain solid. During this time you’ll probably be less emotional and more stern, but that isn’t necessarily out of cold-heartedness. You’re choosing to focus on the practicalities of life rather than the emotional side of things.

Alternatively The Emperor could suggest that there is someone in your life who is governing you. An authority figure that lays down the law quite harshly at times, but know that this person only has the best for you at heart. The period of tough love could teach you a lot of discipline, build your character and lay a solid foundation for your future, so don’t fight it.

The power associated with this card could relate to business too. You may be asked to lead a project in the near future and this could cause The Emperor in you to surface. At its core, this card is about leading with authority and masculine compassion, which includes providing for others and making sure they stay in lie for their own good and the good of others.’

The Emperor reversed embodies all the characteristics of a powerful leader who has let that power go to his head. This could relate to the querent themselves or another authority figure in the querent’s life, depending on where the card shows up in a spread.

‘You have become egotistical and drunk with power. You want things done your way, or there will be consequences, and those consequences will be severe. Instead of being diplomatic, you are dominating and aggressive. You are ruling with fear instead of mutual respect. You lack the maturity to connect with others and persuade them in a respectful manner. Your immobility in certain areas is creating obstructions for those who are under your care. You need to ease up a bit and connect more with your feminine, nurturing side in order to balance things out.’

The Emperor in reverse could also mean that there is someone in the querent’s life with these attributes. If this is the case the querent should keep in mind that this tyrannical ruler is still human and they have let their authority get the better of them. They are not necessarily evil at heart.