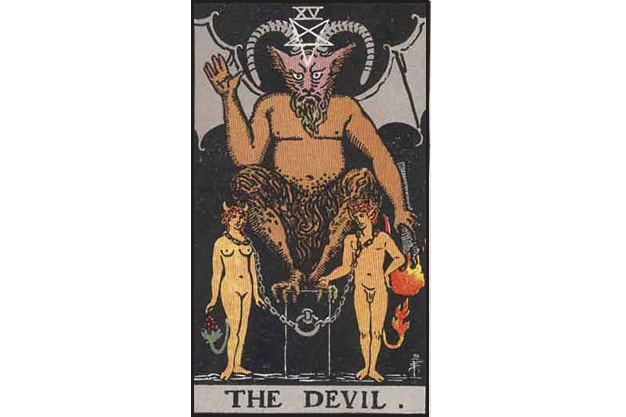 Visual Description of The Devil:

The Horned Goat of Mendes, Baphomet, is the main figure on this card. He represents the balance between opposing forces such as good and evil, but over time he has come to represent pure evil. His bat-wings are a warning that all who come close to him and give in to their animalistic desires will have their life force sucked from them. He salutes the man and woman at his feet with the Vulcan Salute.

These two figures have fallen prey to their animalistic natures. They seem to be chained, but if they wished they could escape as the chains are loose. But their animal natures have taken hold in the form of horns and wings. They are trapped by their own natures. The light in the Baphomet’s hand draws them closer, but the inverted pentagram shows the true, dark side of this card.

Divinatory Meaning of The Devil:

The Fool is learning what his true animalistic nature entails. What his suppressed desires are and how they can take a hold of him, steering his life and controlling his actions without him even realising that they can be overcome. Similarly the querent is being reminded that while we all have a dark side, we are not chained to our vices, rather we can break free from these constraints once we realise that we have the power to do so.

“You’re probably feeling caught up in a situation where you want to act a certain way even though you know you can do much better. Resist the urge to act on impulsions and entertain an ill-tempered nature. You are better than your shadow self. With some effort you will be able to overcome the illusion that you have no choice but to indulge in your dark side. It’s time to break the chains and take control of your destiny.

Your shadow self will always be there, but that doesn’t mean you should allow it to hold you back. Rather look at this aspect of yourself as a guide to what not to do. By working with your shadow self in this way you will be able to restore harmony and balance in your life. Denying you have a shadow self will only feed its power and its hold over you will increase.”

The querent is advised to set clear boundaries with themselves as well as in relationships at this point. While it is fun to dabble in the dark side from time to time things can go wrong easily if they just follow their animalistic nature blindly at this time. While the animalistic nature of humans cannot be denied it can be tamed.

The Devil reversed is often a positive sign if the querent is willing to let go of undesirable or unhealthy attachments. Once they allow these chains to fall free they will sky-rocket into the next phase of being.

“You’re about to enter a wonderful and uplifting time, but before you can fly away you need to escape the cages that are still holding you back. This might mean putting an end to an unhealthy relationship or behaviour that doesn’t serve your higher self. If you have been acting out of fear confront the thing you are afraid of. Your potential is being blocked by your belief that you are incapable of achieving your goals alone. You’re holding yourself back by allowing ideas  that you are inadequate to determine your future. Only by expressing your inner desires and facing your fears, showing the world what you are made of, will you be able to take charge of your destiny once more. Until then you will be living as a shadow of what you could be.”

The querent may be afraid to express their inner desires for fear of being judged, but only by expressing themselves will they harness the fullness of their being. Once they can do that they will find the sense of fulfillment that is currently lacking.