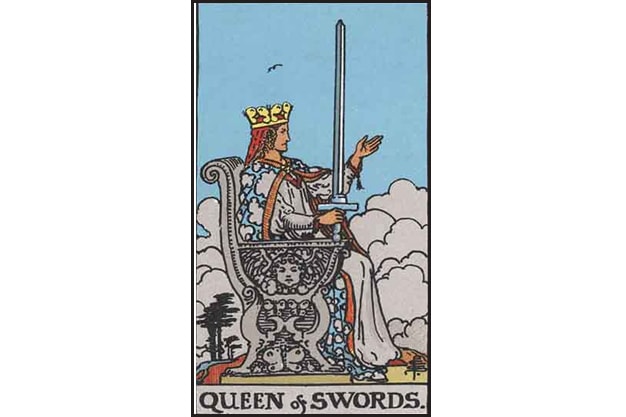 a mutable person who has a lot of experience and wisdom

Visual Description of the Queen of Swords:

The Queen of Swords sits on her stone throne beckoning to the future. With the other hand she holds her sword upright. This is a rather austere posture for a queen, but she has learned that in the search of truth there are many obstacles and she is ready to face whatever may come. Her throne is decorated with butterflies and cherubs, showing that despite her severe posture she still has a softer side. The clouds and wind in the background represent the winds of change and echo her readiness to face the future and whatever it may hold.

Divinatory Meaning of the Queen of Swords:

Upright Meaning of the Queen of Swords Tarot Card:

The Queen of Swords does not necessarily denote a female, but the person represented by this card does have a softer side, even though they don’t always show it. This person may be the querent or someone in their life, but it is definitely someone who has learned a good few life lessons and still remains ready for the future. They are mutable as their experiences have taught them that they need to adapt to their surroundings to reap the best rewards. Their thirst for truth has also allowed them to become wise.

“You give off an air that suggests you think you’re better than everyone else and that you can do anything on your own. This is actually a quiet courage, because let’s face it, you’ve been through quite a bit in your life and having the strength to keep moving forward shows you have a very strong character. Your quest to find the truth has led you down some interesting paths, some of which you don’t really want to recall, but it has also taught you the value of being open minded enough to change.

It’s not that you don’t like people, you just don’t like wasting your time with things that don’t interest you and that’s why the people you don’t let in tend to see you as harsh and unfriendly.”

If this points to someone in the querent’s life they can learn the value of choice from this person as this person has a lot of life experience and wisdom, but doesn’t share it with just anybody. Thus they save their energy and spend it only on things they see worthy.

Reversed Meaning of the Queen of Swords Tarot Card:

Reversed the Queen of Swords is a warning that certain negative character traits are going to condense in either the querent or someone in their life. These are the negative traits that emerge in a person who has the idea that the world owes them because they have gone through so much for the world. They have no problem using their intellect to deceive others and  ensure that they are better off than anyone else.

“You’ve been hardened by life and you know what it’s like to go without, so now you’re using your intelligence and sharp wit to con people out of what is rightfully theirs. It’s not that you don’t do your part, you make sure things run smoothly and you’re really skilled at it, but when the time comes for the payoff you always make your cut bigger. This could be because you feel that without you the other people wouldn’t be getting anything, but on the other hand, without them you wouldn’t be getting anything either.

When this card shows up it’s a sign that it’s time to re-think the way you do things. The world doesn’t owe you any more or less than it owes anyone else.”