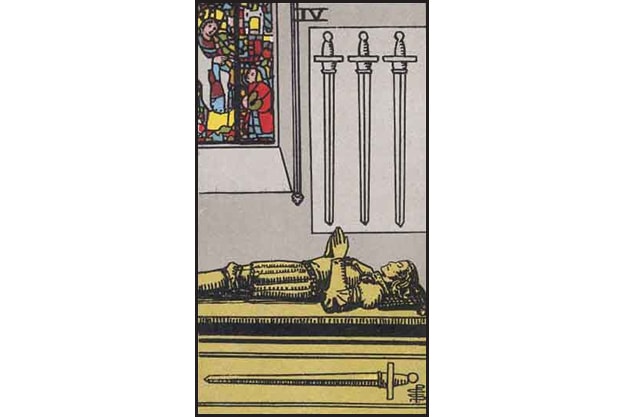 Visual Description of the Four of Swords:

A knight lies in a tomb on top of a coffin. Below him on the side of the coffin is a sword. Three more swords hang on the wall next to him, all pointing downward at his chest and head. His hands are in a prayer pose, as if he is resting in full armour, but the scene looks solemn. While he and his sword are the main focus a woman and child are also portrayed in the stained glass window next to the swords.

Divinatory Meaning of the Four of Swords:

Upright Meaning of the Four of Swords Tarot Card:

The meaning of the Four of Swords can be either literal or figurative. The querent is either going to face a situation where a tomb or coffin will be present or it will feel like they are exiled to a tomb. In a less dramatic sense the querent may also choose to retreat at this time.

“You are feeling locked in. Thi is possibly due to family demands. It could feel as though you just need a little break to regain your strength, or on the other side it could feel like someone is nailing your coffin with every word and action. Either way it is a good idea to retreat and reevaluate your situation.

While taking a break is a good idea you should remain vigilant in case things turn from bad to worse. It’s best to let sleeping dogs lie though, so if a situation doesn’t naturally arise don’t go looking for trouble at this time. This is a very precarious time. You need to rest, but you also can’t let your guard drop too much.”

If the querent is facing a literal coffin this card shows that the deceased is at peace. The querent may however want to take a break and let their emotions balance before returning to everyday life. Whether this card is literal or figurative there is a strong warning associated with either meaning. The querent cannot let their guard down in case they lose everything they have worked for.

Reversed Meaning of the Four of Swords Tarot Card:

The reversed meaning of the Four of Swords is also a warning, although not as severe as the upright interpretation. The querent should be wary of their surroundings and events that may influence them, but they need not be on high alert. Rather this is a time where they feel re energized and ready to continue, but they need to remain cautious and do a great deal of circumspection in order to ensure they are not caught off guard.

“You feel ready to face the world agai, but what has changed since the last time you were out there doing your thing? You need to take a good look before you dive right in. Now isn’t a time to take risks, not even calculated ones. What you do need to do is take the necessary precautions to ensure you don’t end up facing the same difficulties you did that made you lose focus in the first place.

It’s time to get back into the game, so come up with a good game plan that you can follow to ensure you don’t burn out again. It’s all about taking a break and getting some TLC when you need it!”

The querent has taken some time out and they feel ready to face life again, which is a good thing, but this card does carry a warning and they should be careful not to over exert themselves again.