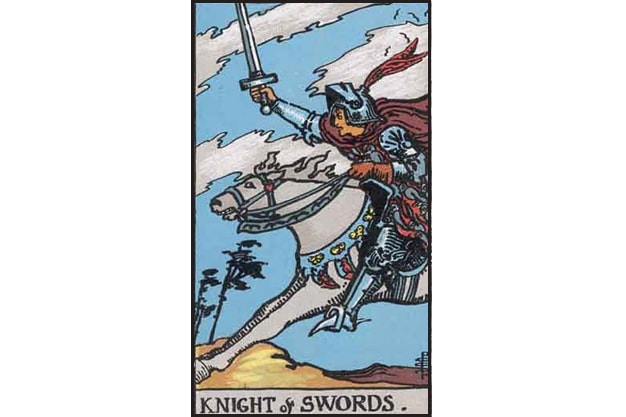 a strong person who is brave and clever

a crafty troublemaker that lacks discretion

Visual Description of the Knight of Swords:

The Knight of Swords is ready and charging. He is dressed in full armour and spurring his powerful white horse on as he holds his sword high. He is motivated and dedicated, his intellectual energy is pure and he is ready to face any obstacles that may come across his path. There is a strong wind and a brewing storm in the background, but the Knight courageously proceeds straight into the gale, relentless in his mission.

Divinatory Meaning of the Knight of Swords:

Upright Meaning of the Knight of Swords Tarot Card:

The upright meaning of the Knight of Swords indicates someone who is brave enough to face any battle. This person is either mentally or physically strong, or both, and they use this in conjunction with their quick and accurate mind. They themselves are a force to be reckoned with. This could be the querent themself or someone in the querent’s life.

“You are the epitome of a Knight in Shining Armour (yes, girls can be knights too…)! You‘re brave and ready for action. You have a lot of physical energy and mental stamina and you know how to combine these two to make the most of your gifts. There is very little that can dissuade you from accomplishing something you’ve set your mind to.

Your valour is one of your best qualities and your intentions are pure, just make sure that you don’t pick a fight with someone who’s just trying to help you by pointing out some flaws in your plan. They might only be saving you trouble in the long run, so charging ahead might not be the best option before you take a look at what they have to say.”

While the Knight of Swords is a card with very noble characteristics this person can become overpowering if they do not remain mindful of their actions and the effects they have on others. If this meaning does not resonate with the querent someone in their life will sweep them up and help them gain forward momentum and the courage to face the future.

Reversed Meaning of the Knight of Swords Tarot Card:

Reversed the Knight of Swords indicates a person who is bombastic and uses their sharp mind for crafty business. This may be the querent or someone in the querent’s life. This person is difficult to manage as they will follow their own volition without concern for others and will attack those that stand in their way, upending any plans that do not serve them directly.

“You know what you want and you’re not going to stop at anything to get it, even if it means hurting a couple of people in the process. Your reasoning probably goes something along the lines of, ‘well, they should grow a backbone’ or ‘the only way to get ahead is to take down the competition’… Unfortunately this leads to a lot of bad press for you and you’ll end up with very few true comrades.

A better way to start approaching things is to realise that causing trouble is a type of loss. In other words, you want to start striving to make as little trouble for anyone as possible. Look at it as a type of goal. You’ll also find that you’re rather smart and you have the power to execute tasks well, in other words people will actually start to like you and this could work to your benefit much more than ‘pushing the weaklings out of the way’.”

If this meaning refers to someone in the querent’s life the querent can try to change this person’s perspective, but they should not get too caught up in this process as they will stand a chance of being the one who is tossed aside as soon as they are no longer useful. It might be best for the querent to address the person’s problem, but then to steer clear before the person causes trouble in their life out of spite.