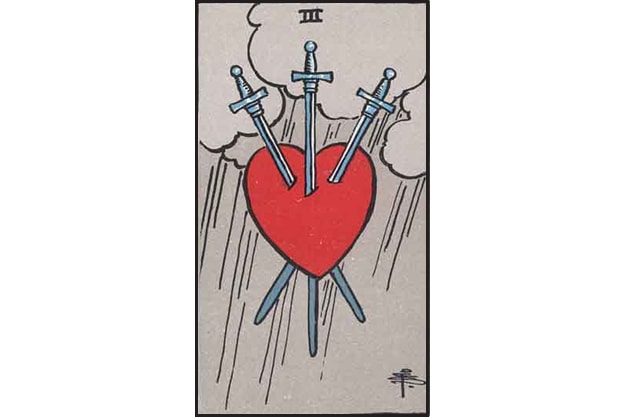 Visual Description of the Three of Swords:

A heart is stabbed by three swords. The heart represents both the physical and emotional pain of loss and heartbreak, while the three swords represent the words, actions and intent that have caused the pain. In the background storm clouds are pouring with rain, showing the storm of sorrow this affliction has created. There is a slight glimmer of hope in the fact that as storms rage and then dissipate so too the pain will disperse, but only after some time.

Divinatory Meaning of the Three of Swords:

Upright Meaning of the Three of Swords Tarot Card:

The Three of Swords represents a painful time for the querent. They are undergoing heartbreak in any of its forms, but most likely through a broken relationship. They have a chance to grieve now and let the emotion out.

“Your heart is broken and boy does it hurt. You’re allowed to cry and be angry and really feel the pain right now. There’s nothing wrong with expressing your emotions, especially when you feel like you’ve been wronged in such a way. The words still burn, the actions even more so and the intent just sealed the deal to ensure that you have felt the stab of pain straight through your chest.

The wounds are still fresh and you’re going to need some time to heal, which is exactly what you need right now. In the future this pain will also dissipate as your wounds begin to heal, but for now let the storm of emotions you feel out and cry and scream and shout as much as you need to until the intensity starts to fade. Bottling it up will only make the wound fester and lead to resentment and regret.”

The querent can use this time to fully express their emotions about the heartbreak they are feeling. In some cases this card may represent civil war, but in most cases it represent a painful loss or end or a relationship.

Reversed Meaning of the Three of Swords Tarot Card:

Reversed the Three of Swords holds a very similar meaning to the upright interpretation of the card, but in a more morose sense of loss. The querent is likely not aware why the heartbreak had to happen and loss through death is strongly indicated here. On the brighter side of this gloomy card iit may mean that the querent is confused because of a sense of alienation, but that the bonds still hold and thus a strong relationship may still be built.

“You’re sad because you recently lost someone you love, but more than that, you’re depressed, because you don’t really understand why it happened. One minute everything was fine and the next… Suddenly they just weren’t in your life any more. And that type of confusion can really make you start wondering what the real meaning behind relationships are.

Don’t get too philosophical about it now. Sometimes things just happen out of the blue and the point isn’t to wonder why they happened, it’s to find a way to keep moving forward. So, instead of looking back and figuring out where things went wrong or how they could have been different, rather start focusing on how to get past this depressed state and start seeing the hope the future holds.”

The querent should be reminded that the Universe has a way of balancing itself out. Therefore if they are facing a depression due to loss now it means that the future holds the promise of something new. They are facing a “winter” in their life, but spring is on it’s way!