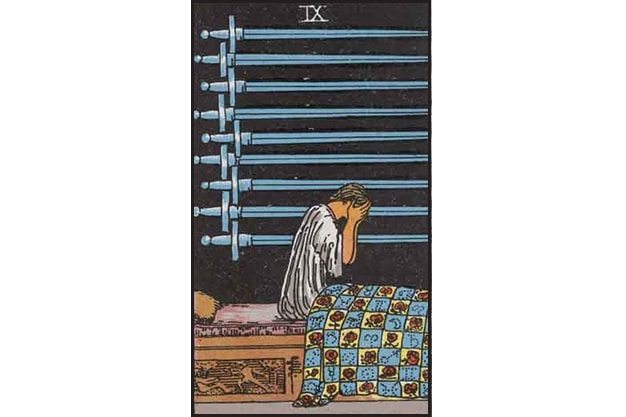 Visual Description of the Nine of Swords:

Nine Swords hang on the wall behind a woman’s bed. It is nighttime and the woman is in her bed, dressed in a white nightshirt. She is sitting up and covering her face with her hands as if she is afraid or grieving, or possibly both. It looks as though she has woken up from a nightmare as the sheets are draped over her, but pushed back. The swords on the wall behind her seem to be stabbing through her torso from the back. They symbolise her own thoughts, the actions of others and the intent behind them. She is in emotional, mental and physical pain.

Divinatory Meaning of the Nine of Swords:

Upright Meaning of the Nine of Swords Tarot Card:

The Nine of Swords represents a dark time for the querent. Their own thoughts are dark and depressing. This state of mind may have been caused by internal or external factors, but the results are the same. The querent is suffering and struggling to cope with life.

“You are at breaking point. Your mind is keeping you up at night with fears and worries. These could stem from a great many sources, such as suspicion or disappointment, cruelty or deception, illness or even miscarriage. The point is that you’re hurting, deeply. You’re crying a lot and nothing seems to be helping. I mean, how do you stop yourself from having nightmares…?

Well, the answer could be to find the root cause of your pain and work through it step by step  Find out why it happened, how it happened, and then make a promise to yourself never to let it happen in that way again. While you can’t promise yourself that you will never feel pain again, you can ensure that you don’t follow the same path that brought you to this point. The best you can do is allow yourself to mourn and then move on when the appropriate time has elapsed.”

The querent is facing a struggle with their own pain. They need to overcome their own mind in the process to finding freedom from the pain. Something has to change inside them in order for them to release the grip of the negative situations indicated by this card. Like with most cards in the Suit of Swords, this is a struggle of mind over matter.

Reversed Meaning of the Nine of Swords Tarot Card:

“You’re afraid and suspicious of anything that moves. You’ve burned your fingers once and you’re not about to let it happen again. You’re a bit ashamed of how it happened, but it’s done now and you can’t go back. At the moment you’re doubting your own abilities to avoid making the same mistake twice, but only because you doubt the sincerity of  those involved. As a result you feel as though you’re being held against your will.

This mental prison is just that, mental. You need to face your fears and take the bull by the horns if you want to avoid living in shame and guilt for the foreseeable future. One way of doing this is to avoid a certain situation or someone altogether, but this isn’t always practical. You need to put your mind to coming up with solutions rather than focusing on the problem.”

The querent is still in the early stages of a situation that could escalate to the full blown meaning of the upright Nine of Swords, therefore they need to solve this problem as soon as possible before their self-doubt takes hold and they regress into a state of complete depression.