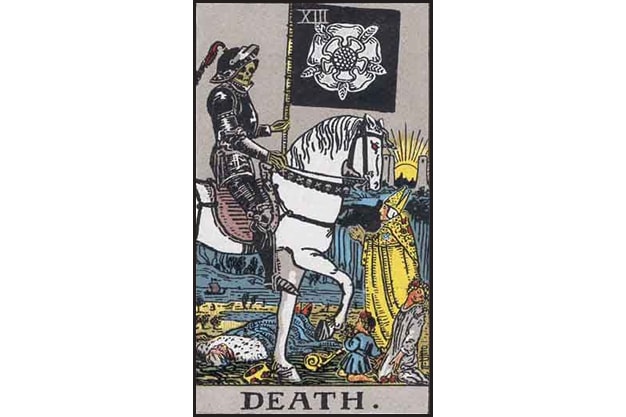 The sun sets on a morbid scene. From behind the two pillars that also appear on The Moon card the light shines its farewell to a black-armoured skeleton riding a white horse. This is the Messenger of Death. His armour shows that nothing will stop him in his duty, while the white horse symbolises purity and strength.

A noble is lying dead before the Messenger and a woman and child are pleading for their life, but they will soon join the boats in the background on their voyage to the next world. Some beauty is found in the white, five petaled rose on the black flag the Messenger is holding. It is a reminder that everything must go through a state of ‘death’ before being reborn. Change is a necessary part of life and the old must die to make way for the new.

Upon reaching Death in his journey The Fool has realised that there is a part of him that must die away to make space for a new aspect. This revelation will have come to The Fool as he hung upside down in The Hanged Man pose. Death is therefore not a card to be feared, it is more a card of the necessity of change than the actual act of dying. The querent should be reassured of this.

‘There is a big change looming on the horizon. The sun is setting on a certain aspect of your life and it’s time to say goodbye. Something is coming to an end and you are helpless to stop it. In fact you need to embrace this change in your life in order to move on.

A certain sense of loss and grief may accompany this card, but rest assured that things will start looking up again very soon. Death is necessary in order to move forward. This may be a Spiritual, emotional or physical death. Something needs to give way to make space for something new to start blooming in your life. You won’t be able to stop the process. All you can do is accept the natural cycle of life.’

The querent should be reminded of the quote “you cannot step in the same river twice, for it is not the same river and you are not the same person.” The truth is that we are reborn in every moment and clinging to certain aspects of the past will only hold them back from reaching new heights.

When Death is reversed it is a sign that the querent is resisting a necessary change in their lives. They are clinging to a negative situation or person This attachment to the past is keeping them from reaching their goals.

‘You’ve become stagnant in a situation or relationship. You know it’s time to let go, but you’re still clinging onto the attachment in hopes that it will one day feel like it did in the past. The truth of the matter is that it won’t. Letting go of this unhealthy attachment is the only way you will be able to heal yourself emotionally, physically and Spiritually.

It may be a prolonged process to let go, but the Death card reversed is urging you to go ahead and cut old ties. If you do not things will only remain in a state of limbo and you won’t make any progress.’

The querent is at a critical point in their Spiritual journey and must be urged to move forward or they will remain immobile for an indefinite period of time.