Everything You Need To Know About Tarot 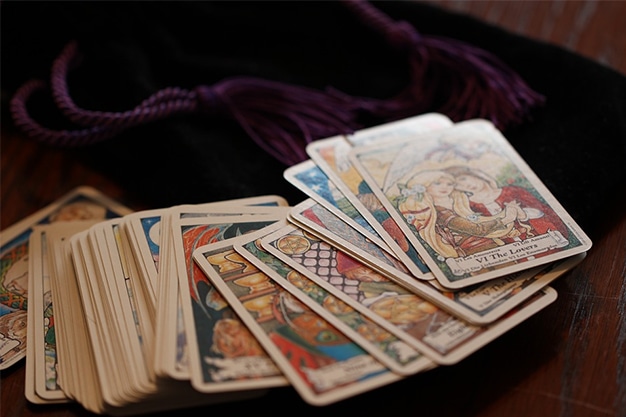 Tarot reading might seem like something that is otherworldly and completely supernatural. To a certain extent, this is true. However, Tarot isn’t as scary or mystical as people assume. In their basic form, Tarot cards are a tool used for divination. Tarot card reading can be performed by anyone though you’ll receive better readings from people with strong intuition, clairvoyance, clairaudience, and clairsentience. These people may have one or any combination of these gifts and they will use them to channel the energy of the universe. This is how they use Tarot to provide answers and guidance for people.

There are a combination of things that Tarot readers can do to provide more accurate Tarot readings. This includes selecting a deck that they personally connect with, practicing their skills, learning to frame questions correctly, and being receptive to client feedback. Although anyone can read Tarot, people with some innate psychic abilities have a stronger connection with the art. Having a heightened sense of intuition makes reading Tarot easier and more accurate.

One of the great things about Tarot is the variety of people who are interested in it. Although Tarot has some basic rules, in general there is a lot of freedom to create your own methods, interpretations and cards. Most modern Tarot is based on the Rider-Waite Tarot cards. This deck from the early 1900s, has inspired every Tarot deck that has come after it. This 78 card deck, split into the Major Arcana and the Minor Arcana, set the structure for modern Tarot.

A Tarot reader’s strongest skill is their ability to interpret the cards. Most Tarot decks do come with guidebooks that provide a general meaning for the cards, but ultimately it is up to the reader to their intuition to read the cards in a way that is appropriate for the situation. Tarot interpretations may vary wildly and this is welcomed and encouraged.

Although the Rider-Waite deck has become the de-facto cards of Tarot reading, another well-established and old Tarot is Latin Tarot or Tarot de Marseille. These cards are even older than the Rider-Waite deck, dating back to the 15th century. The Latin Tarot deck is less elaborate, but also contains 78 cards. Their images are simpler and many people believe that this makes them much harder to interpret than modern decks based on the Rider-Waite Tarot.

It may sound like Tarot decks are elaborate and unaffordable. However, there are numerous different cheap Tarot decks out there, you just have to know where to look. Inexpensive Tarot cards can be found on Etsy, ebay, Amazon, or at your local metaphysical store.

An interesting thing about Tarot is that it can be a tool for other kinds of supernatural activity. Not so surprisingly, Tarot cards are a common tool for Wiccans, Pagans, and Witches. Their simple designs combined with their intricate symbolism makes them the perfect tool for using in Tarot spellwork. Tarot cards are also inexpensive and widely accessible, so they are a staple in any modern witch’s arsenal.

To be a great Tarot reader, it’s important to develop your own style of reading the cards. This can mean making up your own interpretations through your intuition or creating your own spreads and methods for reading. Although the types of Tarot spreads can vary, every Tarot reader should learn a few basic ones.

The simplest Tarot layout you can learn is the one card Yes or No draw. Then as you get comfortable exploring the art of Tarot you can move on to three-card layouts, which are simple yet more detailed than a one card draw. The most popular and basic three-card spread is the Past, Present, and Future layout. Other three-card spreads are variations and modifications of this layout that suit a certain situation. After three-card spreads, come five-card spreads. These layouts are still relatively easy to use but provide deeper insights into a situation. When you have mastered the basic layouts, you can move on to harder ones that involve nine, ten, twelve, or even fourteen cards. One of the most widely used though an elaborate layout is a ten-card spread called the Celtic Cross.

To go along with the different types of Tarot layouts, you can consult the Tarot on a wide array of topics. You can literally turn to Tarot for any question and an answer or possible answers will come to you. Although you can consult the Tarot over any subject, some of the most popular topics to ask about are love, marriage, and relationships of any kind. You can even use the Tarot to plan for your week by casting a weekly Tarot reading.

Although Tarot is traditionally conducted in a live face-to-face reading, the modern world has made it possible for anyone to receive a live Tarot reading at any time. There are people who offer readings through the telephone, over webcam, by email, or even through their own websites. No matter who you are or where you live, you can receive or give a Tarot reading right from your home.

Tarot is a powerful tool for divining all of life’s secrets. If you’re curious to learn more about Tarot or need questions answered, let me, the Tarot Prophet Sophia Loren, unlock your personal insights with a completely FREE 3-card Tarot reading. When you’re ready to delve deeper into the world of Tarot, contact me to receive an illuminating 3-card reading tailored to your specific needs, no strings attached.