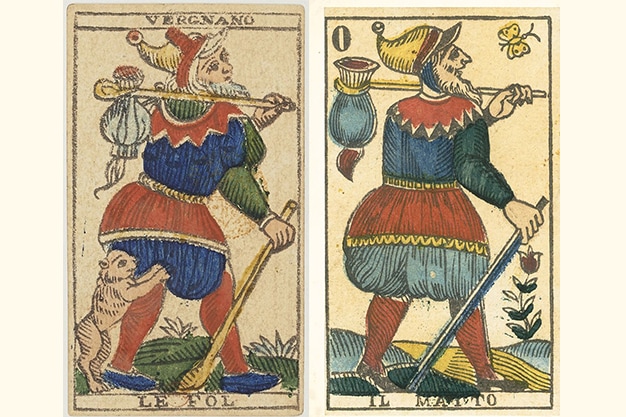 Although the Rider-Waite cards have become for the most part the gold standard of modern Tarot, Latin Tarot (or more commonly known as Tarot de Marseille) is seeing a resurgence. The Latin Tarot cards are pre-occultized and are closer in relation to early Tarot playing cards from the 15th century. Despite the popularity of the Rider-Waite cards, the Tarot de Marseille is still widely used in Europe.

The early iteration of the Latin Tarot was used to play card games rather than for divination. Also unlike modern Tarot cards, the images on the Latin Tarot are based on the folk traditions of the early Tarot cards. Latin Tarot traveled from Italy, where it eventually fell out of fashion to France, where these cards are still popular today. In the 19th century, the French occultist Papus gave the Latin Tarot its modern name, Tarot de Marseille. Eventually, this type of Tarot made its way back to Italy, and the name and the Marseille designs stuck.

Although Latin Tarot and the Tarot based on the Rider-Waite deck are similar in structure, there are a few key differences. Each of the Rider-Waite cards has its own unique illustration and meaning while the drawings on each Marseille card are symbolic to the suite it belongs to.

Like most traditional Tarot card decks, the Marseille deck contains 56 cards in 4 different suits. However, the Marseille deck uses the suitsBatons (Wands), Cups, Swords, and Coins (Pentacles). These number cards in the suits don’t have unique designs, instead they depict the suit symbol and the number by showing for example two coins for the Two of Coins card. Each suit does four court cards: a Valet, a Knight, a Queen, and a King.

For the most part, the Trump cards of Latin Tarot are the same as the ones in the Rider-Waite deck. In the Marseille deck, the Justice card is card no. 8 and the Strength card is no. 11. Also, the Death card is called the Nameless Arcanum, meaning it doesn’t have an official name. The religious names and imagery of the Marseille trump cards are reflective of the earlier Tarot cards. Another difference is that the High Priestess and The Hierophant are called the Papess and the Pope. Staying true to the original Christian iconography, the Tower card is called the House of God in the Marseille deck.

The symbols on the Latin Tarot are much more simplistic than modern Tarot cards and many Tarot experts agree that they are a harder deck to read. They require more intuition and aren’t suggested for beginners. Since the designs on the Marseille deck are more simplistic, there’s room for a broader interpretation. Some people feel that the elaborate nature of the images on modern Tarot decks plant a biased image in your mind. This can make it harder to read the cards naturally and intuitively.

How to Read Latin Tarot

Despite the differences between Latin Tarot cards and modern cards, there isn’t much difference when you conduct a Tarot reading. Latin Tarot can be used in the same way as more traditional Tarot readings. You can use the same spreads that you normally use with other decks for the Marseille cards. The only noticeable difference is that the Marseille cards require more interpretation from the reader. When using a Latin Tarot deck, you have to really tap into your intuition to understand the meanings of the cards.

However, like any form of Tarot, practice strengthens your skills. Studying the deck more thoroughly than you would a modern deck will help you delve deeper into your intuitive skills. Mastering Latin Tarot also means you’ll need to have stronger memory skills so you know how the cards relate to each other in different spreads. Many modern decks are actually derived from the Marseille Tarot, so studying these cards will help you to understand the history of Tarot better. Most Tarot experts believe that you can overcome the difficulty of this deck through lots of practice. As you study the cards, you’ll have an easier time unlocking their meanings.

Overall, the Latin Tarot does not differ much from modern or traditional Tarot. The card designs and meanings may differ, but the methodology remains the same. The only major difference is that you might have to search deeper into your intuition to read the Tarot de Marseille.

Although I use a more modern Tarot method, my FREE 3-card reading is just as accurate and meaningful as any reading using the Latin Tarot. Request a no strings attached, 3-card reading from me today to provide insights into your past, present, and future. Your personal reading might just reveal things you never knew about yourself.