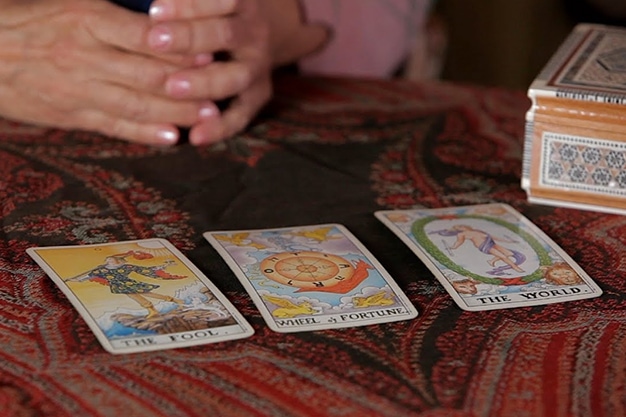 The Basics of Tarot

The Major Arcana, also known as trump cards, make up the foundation of a Tarot deck. There are 21 numbered cards in deck and one unnumbered card. These cards depict major life events, decisions, and important experiences. The Major Arcana cards help us look for greater understanding and meaning in our lives. The imagery of the cards is very important and they help the Tarot reader provide their client with answers to their big questions. The images on the Major Arcana are influenced by many cultures and religions, including Buddhism, Hebrew, Christian, Sufi, Hindu, and Egyptian. If a lot Major Arcana cards are pulled from the deck, that person is experiencing major life changes. The cards can either pulled upright or reversed. Upright cards tend to have more positive readings and pulling reversed cards means that the person isn’t listening to what the universe is trying to tell them. The 21 Major Arcana cards are as follows:

The High Priestess no. 2

The Minor Arcana consists of 56 cards across 4 suits. Each suit has 14 cards; cards numbered 1-10 with a King, Queen, Knight, and Page. The four suits are Cups, Pentacles, Swords, and Wands. Each suit represents a different element and different aspect of our daily lives.

The suit of Cups represents the element of Water. This suit deals with our innermost feelings and our emotions. Cups are associated with innovation, creativity, love, feelings, relationships, and connections. Drawing this suit means you are thinking with your heart and feeling impulsive

The suit of Pentacles represents the element of Earth. This suit deals with the material aspects of life. Drawing this suit represents your livelihood, financial status, and calling in life. Pentacles represent our physical being and reflect our outer situations. Some of the positives of drawing Pentacles include prosperity, realization, and manifestation.

The suit of Swords represents the element of Air. This suit deals with our beliefs and our ability to understand. Swords represent battles and warfare, thus making it the most dangerous and powerful suit. This suit is associated with the mind and our intellect. Some of the positive aspects of Swords are ambition, courage, a call to action, and change.