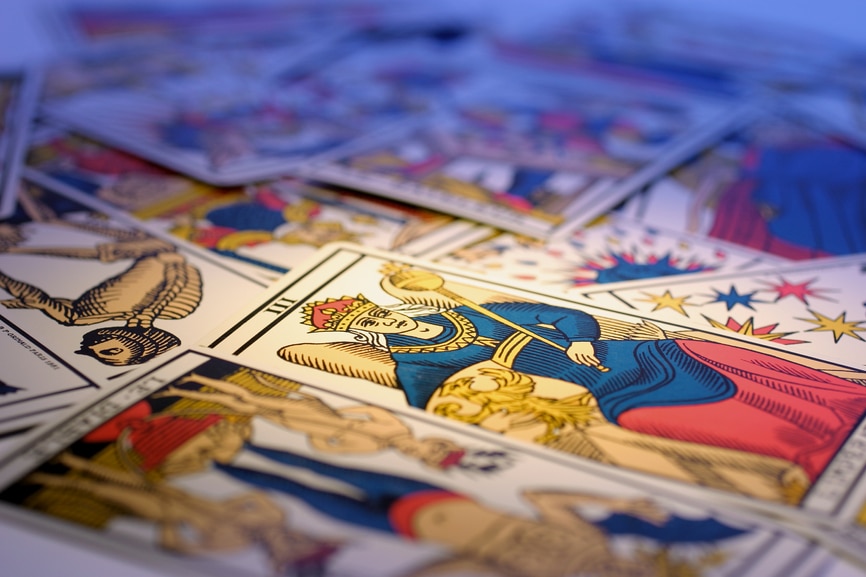 The Heart of the Tarot cards is Major Arcana. These cards show how the law of the Universe affects human life. The Major Arcana represents the path to spiritual self awareness, and is constructed from 21 numbered cards and the Fool (an unnumbered card). Major Arcana is the foundation of the Tarot deck, and the readings are considered the key to life lessons.

The Cards in Major Arcana

The cards in Major Arcana symbolize our strengths, hopes, weaknesses, fears and everything that makes us an individual person. They are shown in an archetypal figure, which can be anything from a mother figure, religious leader, figure of authority, or some magical and mystical individual. The cards in Major Arcana can be read in two ways, depending which way the card falls (upright and reversed). It is worth noting that the meaning of the cards in the Major Arcana should be taken as a guide in life. Many outside factors influence the true meaning of the card. This section of tarot cards contains the famous Death Card. Just to clear the myth about it, let’s explain its meaning. If the death card is faced upright, it represents an ending or a beginning to something, or generally a change in direction and transition. When reversed, it symbolizes person’s resistance to change and his inability to move on.

Meaning of the Cards

Major Arcana card meanings carry greater weight than Minor Arcana. The reason is that the card meaning should provide long term guidelines for the client. Cards in Major Arcana are numbered, and represent the life stages in human life from the beginning to the end. Their meaning differentiates and is closely linked to the question the client asks. Other factors influencing the meaning are where the cards turn up in the spread, and how are they displayed. Since they illustrate the structure of our consciousness, they hold the keys to the life lessons passed from one generation to another. Several cultures and traditions have influenced the Major Arcana including Hindu, Hebrew, Christian, Egyptian and Buddhist.

If the reading of the client is constructed mostly of Major Arcana cards, he/she is going through some life-changing events. These events will most probably have long term impact, and are important lessons for the client. Once he pays attention to the lessons, he/she can progress in his/her quest, be it personal or spiritual. If several cards are reversed, it indicates the client is not paying attention. Therefore, he/she must return to the lesson of the previous card, before he can move forward.