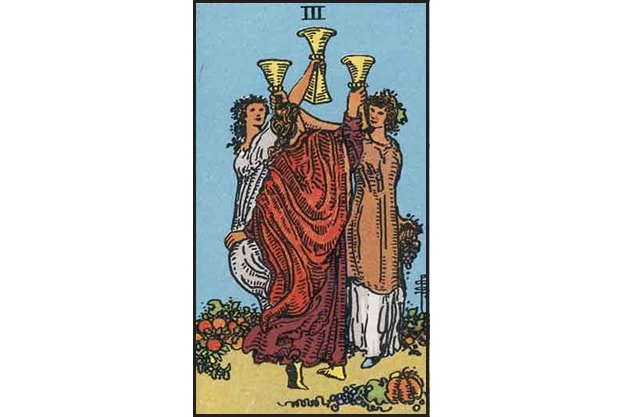 Visual Description of the Three of Cups:

Three women dance and raise their cups in celebration. They are rejoicing in their friendship. Each of them is unique, but together they have made an abundant harvest of flowers, fruit and pumpkin. This represents the beautiful fruit of their labour and its sustainability. While each of them is capable in their own way, together they achieved greater success. They are happy and their joy builds between them. They are connected on an emotional level and have the power to build each other up and offer support where needed.

Divinatory Meaning of the Three of Cups:

Upright Meaning of the Three of Cups Tarot Card:

The querent has accomplished a goal with the help of others and it is time to celebrate success. This could also be an emotional healing that has taken place which has changed the querent’ life for the better. In either case they have found respite in their friends and this has led to a happy conclusion.

“You’ve made it! You got to where you want to be, but you couldn’t have done it without the people that helped you along the way… It’s time to celebrate and thank the people that helped you. Together you have grown and made a success of your ambitions. You feel a great amount of gratitude towards these people and they in turn to you. Each of you realise that without the hospitality of the other you would not have made it this far.

While this is a card of fortune, it may be emotional fortune rather than physical fortune that you have gained. Through this process you have grown as a person and healed past wounds and as a result you have gained things that add to your happiness much more than money ever could. That’s not to say fortune wasn’t material, but the biggest blessing to take away from this experience is the fact that you could share it with like-minded people that truly understand the meaning of your joy.”

The querent is urged to show their gratitude and keep strengthening the bonds of friendship with those that share in their success.

Reversed Meaning of the Three of Cups Tarot Card:

Reversed the Three of Cups shows the negative aspects of indulging in an unhealthy group dynamic. They are urged to bring this dynamic to an end as soon as possible in order to stop it from ruining or damaging them.

“There is nothing worse than a false friend, except a whole group of false friends. At the moment you’re bound to find yourself in a group dynamic where you feel like they’re hiding something from you. You’ll find yourself overindulging and gossiping while you’re with these people, which is causing you pain, but for some reason you feel like you need to fit in…

But think about this, if the group is gossiping while you’re there, what’s to say they aren’t gossiping about you behind your back? Aren’t you causing yourself more damage by being a part of a negative group rather than sticking it out on your own for a while until you find people that actively work on building each other up instead of breaking others down? It might be tough, but it’s time to end the negativity before these false friends stab you in the back.”

Pain is something the querent should be wary of at this stage. They should actively avoid unhealthy social situations and search for healthy ones. This card is a clear indication that some friendship is about to turn sour if it hasn’t already and as such the warning should be heeded if the querent wants to avoid the pain associated with unhealthy or false friendships.

Other Suits Of Cups Cards