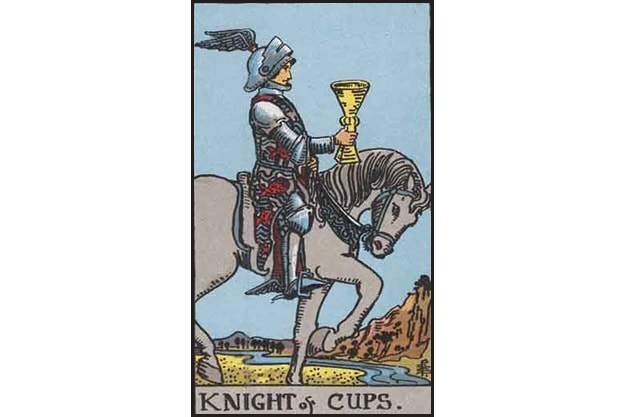 Visual Description of the Knight of Cups:

The Knight of Cups sits on his powerful white horse. While the beast represents power and energy it is showing its pure nature, walking calmly instead of charging forth. The Knight is carrying a cup which represents emotions and creativity, which is mirrored in the symbolic fish on his robe. The cup is close to his heart, showing that he is in touch with the deeper workings of his soul. In the distance the river feeds a couple of trees in an otherwise barren landscape. This is an indication that the emotional flow represented by the river has the power to inspire growth in even the most unlikely of places.

Divinatory Meaning of the Knight of Cups:

Upright Meaning of the Knight of Cups Tarot Card:

The Knight of Cups can refer to the querent themself or someone in the querent’s life that possesses these characteristics. This person, querent or otherwise, is in touch with their emotions. This inspires a great deal of creativity within them, which manifests as a tendency to be a romantic dreamer. This does however not detract from their ability to function in the world in an intelligent manner.

“You always look at the glass half full. You love thinking of how wonderful things can be. But on the other hand you also realise that there are certain aspects of the world that cannot be changed and need to be dealt with in a certain way. This is thanks to your emotional intelligence. You’re in tune with your feelings, but you don’t let them overwhelm you. You also don’t let circumstances stand in the way of your imagination.

You have a knack of seeing the brighter side of life and this allows you to inspire hope in others. Your heart is true and you only want the best for them. This is an admirable way to conduct yourself and you will find many people attracted to these qualities.”

If the meaning does not align with the querent themself someone in their life will inspire hope in them by showing them that emotions are nothing to be afraid of. In fact they can be used to inspire the imagination and creativity for better problem solving.

The Knight of Cups could also indicate that a message, thing or person is on its way or has recently been delivered.

Reversed Meaning of the Knight of Cups Tarot Card:

The reversed meaning of the Knight of Cups is more dire. It shows the negative use of imagination and creativity. These characteristics can pertain to the querent or someone in their life and include idleness and a tendency to be untruthful. This leads the person, querent or otherwise, to indulge in fraud, where swindling is seen as a easy means to fulfilling the dreams this person has.

“You have a great imagination and you love imagining yourself with a lot more than you currently have. You’re also very smart, which counts in your favor. Unfortunately. Instead of using these qualities to get ahead in a respectable manner you’ve been using them to trick people into giving you things. It’s true that it’s easier for you to do this than put in an honest day’s work, but is that really the way you want to be remembered? As someone who only thought of their own wellbeing…?

It’s time to take a good honest look at yourself. You have a great deal of potential, but you’re using it in a devious way. In the long run this is putting a lot of emotional pressure on yourself. So, for the sake of everyone involved, try using that great imagination and intelligence for something that benefits more people than just yourself.”

If these characteristics point to someone in the querent’s life they should refrain from getting too involved with this person as this person is after personal gain and will do or say just about anything to get what they want.

Other Suits Of Cups Cards