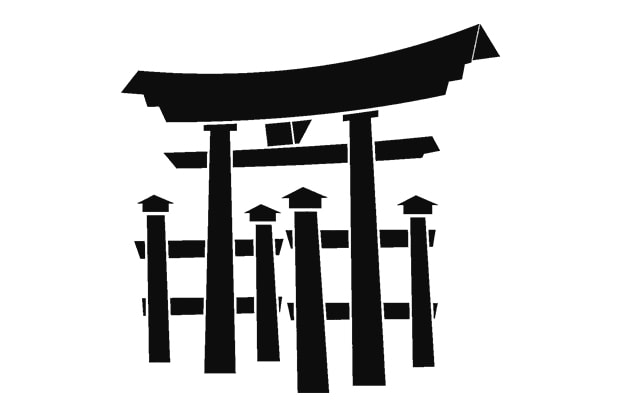 Shintoism denotes the religious system and mode of indigenous religious practices on Japan. The religion is based on spirits called Kami. This article, however, focuses on the Torii gate as a religious symbol that marks the point of departure from the finite world and entry into the infinite world of the gods. 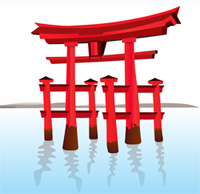 The Shintoism torii, as is the religion itself, can speculatively be said to have originated from Japan. It is a type of gate that marks exit from the natural and venturing into the supernatural. Often, the gate is placed at the opening of a Shinto shrine. Here, entry through the gate places a difference between the profane and the sacred on either side of the gate. The gate is also a symbol or a signal that a Shinto shrine is close by. The symbol is further used to place and identify Shinto shrines on road maps.

Interestingly, the Shinto torii signs have also been seen at Buddha temples in Japan. These are also used to indicate shrines and are often placed at the entrance of Chinjusha shrines. These are, however, comparatively smaller in size.

The Shinto torii can be said to have appeared on the religious and cultural scene during the Heian period as evidence my some ancient texts at least more than a thousand years old. Another attestation of the Shinto torii sign the one found at the Hachiman shrine. This one was put up in the 12th century and is arguably the oldest stone torii. The ryōbu torii found straddling the Kubō Hachiman Shrine is perhaps the oldest wooden torii, having been put up in the 16th century.

Conversely, some accounts have found that the torii may have come from outside Japan after all. Pointedly, India is said to be the original birthplace of the torii. The torana gates of the Sanchii shrine are credited with being the prototypes that gave birth to the torii as we know it today. This supposition is bolstered by the similarities between the symbols found at the entrances of the Shinto and Buddhist shrines.

In yet other accounts, the torii is postulated to have been copied from the Chinese pailou. This is irrespective of the distinct ways that a typical torii varies from the pailou. The common thing about the two gates is perhaps the fact that they both have no doors, o fences leading to and from the gates or anything that bears the modern concept of a gate. There are exceptions to this observation though. The Omiwa Shrine has a triple-arched torii.

The Shinto torii are sometimes unpainted. When they are, however, painted, vermilion or black colors are used. This is not to deny the use of other colors possibly used in painting the Shinto torii. Reinforcements of the torii can be in the form of a first and second level of lintel (Shimagi), with an additional upward curve (Sorimashi). In addition, wedges (kusabi) are used to fasten the nuki and may be of no more value than the ornamental.

This practice (of visiting a shrine) is referred to as the Omairi. In order to visit the shrine, the are steps to be followed. It must be noted, however, that even non-adherents can visit the shrine. When approaching the torii, it is mandatory to respectfully stoop as a sign of acknowledging hallowed grounds.

In the event some water is provided, it is essential that you wash up. This is done with some procedural attention though. First, wash you left hand, then the right hand and finally clean your mouth thoroughly. Please ensure that the dirty water from your mouth is not spat out to the washing basin or whatever washing mechanism in place.

Once you approach the shrine, announce your presence through the use of a bell, if any. Make your donations and proceed to make your prayers. Before prayer, it is required that one hands the other hand and places them on the chest. Do not forget to bow or do what you are thereafter instructed to.

The use of the Shinto torii is widespread in Japan as the phase that separates the profane from the hallowed precincts of Shinto and Buddha shrines. It design varies from context to context just as are the accounts of the origins of the symbol.