How Many Cards Are There In A Tarot Deck? 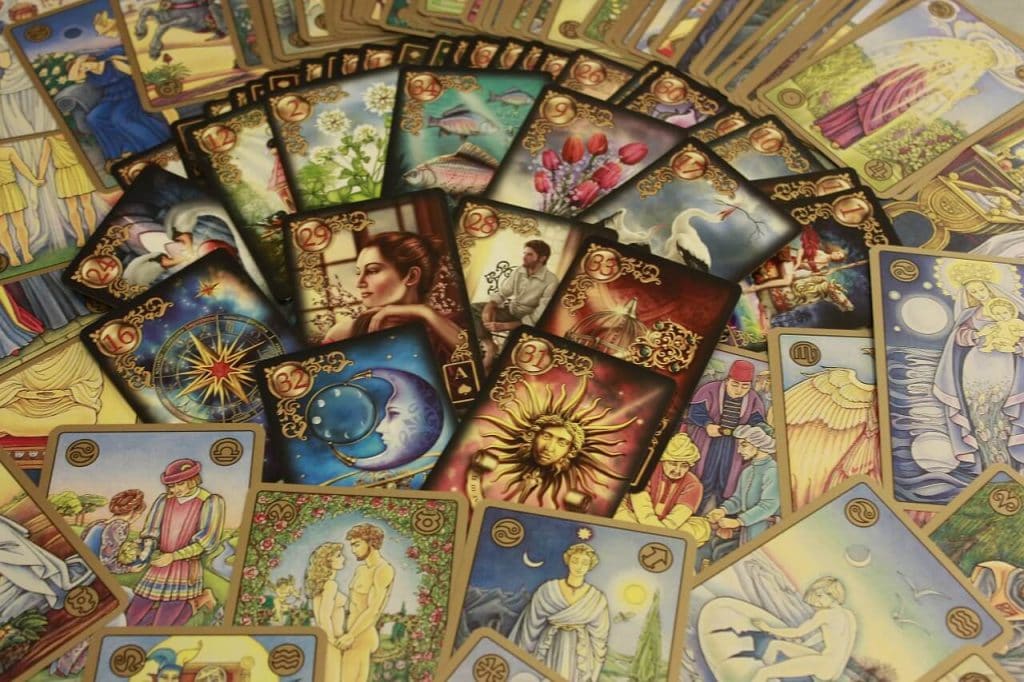 How Many Cards In A Tarot Deck?

The short answer is that there are 78 cards in a standard tarot deck, but the number of cards in a tarot deck may vary depending on the designer and publisher. The deck is usually split into two parts, namely the Major and Minor Arcanas. Arcana means mystery or secret and each of the tarot Arcanas provide insight into the Major or Minor mysteries of your life.

There are 22 Major Arcana tarot cards in a deck. They are numbered from 0-21 and tell the tale of The Fool, a young man venturing out into the world. On his adventures he faces universal life events, those types of situations we all find ourselves in. That is why these are called the Major Arcana. They are important life lessons we all need to learn. In a tarot reading consisting of mostly or only Major Arcana cards the querent will be informed of all the major life events they are currently experiencing or attracting. These are seen as important long term influences that can offer solutions or opportunities for growth.

I – The Magician XII – The Hanged Man

IV – The Emperor XV – The Devil

V – The Hierophant XVI – The Tower

VI – The Lovers XVII – The Star

VII – The Chariot XVIII – The Moon

The cards in the Major Arcana follow a strict order in all tarot decks, although some tarot decks are increasing the number of Major Arcana cards to include more major influences. Over time some life events have become more important and as a result some feel it necessary to add more tarot cards to the deck. These are usually added to the Major Arcana.

On the other hand the Minor Arcana shows everyday events or situations that you can be involved in. There are 56 Minor Arcana cards in a tarot deck. They are split into four suits, much like a normal deck of playing cards, but each suit has 10 number cards (Ace-10) and 4 face cards (Page, Knight, Queen and King). In a tarot deck each suit represents a different sphere of life:

The suit of wands is associated with the fire element and pertains to creativity and the ability to create new things.

The suit of swords is associated with the element of air and pertains to action and behaviour; how a person responds to situations or what is holding them back.

The suit of cups is associated with the water element and pertains to emotions and feelings surrounding situations.

The suit of pentacles is associated with the earth element and pertains to the material aspects of life, especially finances.

While each of the 78 tarot cards have their own special meaning, the cards of the Minor Arcana are often seen as less important than Major Arcana cards. This is because they pertain to everyday issues that only have a short term influence and can change over time.

In the Minor Arcana, the cards with the same number often carry a similar message, but each message pertains to the deck they are found in. Each suit progresses from the spark of inspirational energy, symbolised by the Ace, through all the trials and triumphs associated with that suit to the final mastery of that sphere of life, symbolised by the King.


Therefore, in a tarot deck there are 78 cards that each represent a different aspect of life and as a whole the large number of tarot cards in a deck allows for the reading to cover all the important aspects of life. They give you insight into the mysteries and secrets that are working at a subconscious level to influence your everyday experiences. That is why there are so many cards in a tarot deck.

Sometimes people find this is still not enough and they decide to add more cards. If you have a tarot card deck with more than 78 cards the meanings of the extra cards should be explained by the publisher.