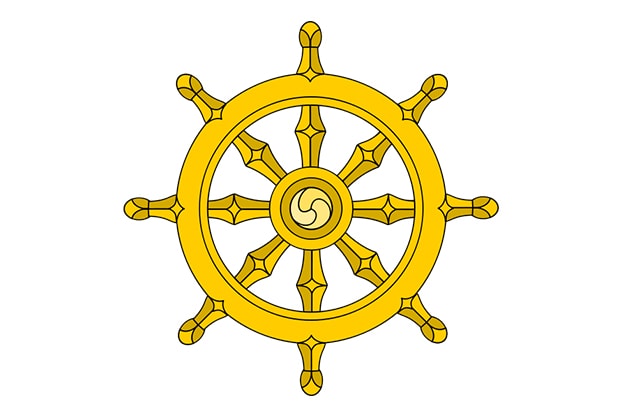 This article reviews the Dharma wheel as an integral part of the symbols of Buddhism. Just as the cross is considered in Christianity, the place and position of the dharma wheel is indispensably assured in Indian communities. Also known as the dharmachakra in the Sanskrit rendering, the symbol is named among the eight most auspicious Buddhism symbols. According to Indian Iconography, the other symbols in this regard are the parasol, two golden fish, the conch shell, the lotus, the banner of victory the vase and the eternal knot.

The dharma wheel is, etymologically speaking, an establishment of law as espoused by Buddhist teachings. As one of the ashtamangala of Buddhism, it is one of the longest existing symbols— basing on available and verifiable sources. The symbol made its grand entry on the Buddhist scene in the post-Indus Valley Civilization and gained further notoriety of use in the time of Buddhist King Ashoka. The Buddha, ostensibly, turned this wheel for the first time when he delivered a sermon in the deer park. This, and other turnings of the wheel, bespeak of the movements evident in the Buddhist cosmic order.

A typical dharma wheel is actually just a normal chariot wheel but with certain numbers of spokes. When these spokes overlap and extend past the wheel, they might be considered spikes— which essential represents various incisive insights. The wheel itself represents the completeness of the dharma. The rim of the wheel speaks of the necessary mindfulness and concentration that the religion teaches.

The spokes, on the other hand appear in different numbers on each dharma wheel symbol. For instance, when the wheel has four spokes, it is indicative of the four dhyanas. When the wheel has eight spokes, it stands for the eightfold path. Indian traditional fork lore holds that the eightfold path is the recommended way through which enlightenment can be obtained. This was first opined by the Buddha in his first treatise after realizing his own enlightenment. The eight, therefore, bear enormous significance to Buddhism and include: The right (Samyang in Sanskrit) view, intention, speech, action, livelihood, effort, mindfulness and concentration.

Further, when a wheel has ten spokes, this is indicative of ten directions. This means everywhere. Twelve spokes, further, speak of the twelve links said to be of dependent origination. Twice such a number of spokes represent an additional twelve links needed for liberation from the samsara— the endless rebirth cycle which can only be avoided through the teachings of Buddha. Finally, thirty one spokes indicates the corresponding number of realms of existence as expounded elaborately in Buddhist rendering of the Mandalas (universe) and cosmology.

The wheel is mostly of golden coloration. The center of the wheel may consist of one of the following: the ying-yang symbol, a wheel, or three shapes eddying together (a representation that is said to be of the three treasures: Buddha, dharma, Sangha).

In the modern day, the symbol is widely evident on almost all Indian art and artifacts. The wheel is also seen inscribed on the palms and feet of the Buddha in images and is considered one of the marks of a great man (Thirty two marks make a great man). The symbol is often flanked with two deer, a reminder and indication that the first Sermon of Buddha was in the Deer Park at Sarnath.

In some Indian Iconographic accounts, the wheel is used as a weapon. For instance, in some Tibetan contexts, various vengeful deities can be seen using the wheel in waging war against evil and ignorance. This notion, perhaps, is derived from the god Vishnu image of holding a disc as an ultimate weapon.

In conclusion, the dharma wheel is an important symbol in Indian iconography. The symbol has been used among Indian and Buddhist communities as a depiction of Buddha’s teachings on, profoundly, how one can escape Samsara, conquer evil and realize enlightenment— the desire of every Buddhist. It is also essential in seeking to understand in the Buddhist understanding of the Mangalas (universe) and associated quests for accomplishment and enlightenment. To further buttress this understanding; Tibetans have the ‘Prayer wheel’ which renders various attributes to the wheel, besides considering it as a wheel of law.