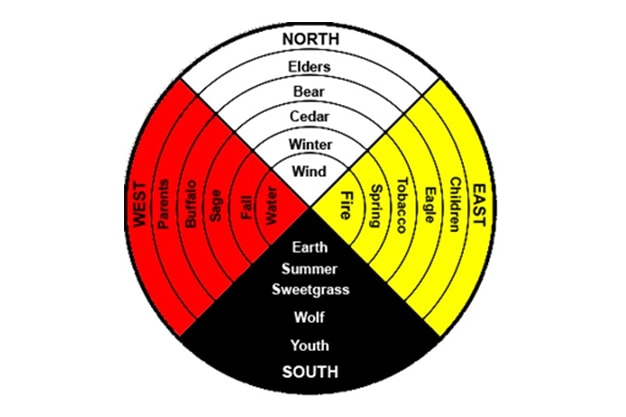 This article discusses the Native American Earth Medicine Wheel as a symbol and not as the monuments constructed and called by a similar name. The phrase, ‘Medicine Wheel’ is of course not of Native American origin. It is derived from American and European expressions and it should therefore be a common understanding that the Native Americans may have referred to it in different terms. In other contexts, the symbol is known as the sacred hoop. Any regards of the wheel as being in possession of any medicine qualities should be discarded and disregarded in favour of the fact that the wheel is simply considered a hallowed symbol with tremendous spiritual implications.

The symbol is common among, chiefly, the Native groups found in the Americas. However, the symbol is extensively hallowed and used by other pan-Indian groups. Interestingly, some groups have emerged lately and inculcated the use of the wheel in their arts and activities. These are the neo pagan movements, the new age proponents and hippie establishments.

It ought to be properly understood, from the very onset, that the use of the wheel symbol greatly mimics the manner and way of life of the indigenous groups such as the Native Americans. These groups often conduct their ceremonies in a circular and clockwise manner- in the same way the sun rise and sets. In similar ways, the movement of the wheel follows the same path. All these are the notable efforts of these groups in trying to get aligned to the forces of nature. Much good is done and accomplished, they say, when one is inclined to forces of nature, besides seeking the common good of everyone.

The most conspicuous aspect of the symbol is of course the circle. It is a symbol of the cycle of life. The circle has two intersecting lines which give an appearance of a cross at the center of the circle/ wheel, thereby dividing the wheel into four equal parts. Imagining the wheel as being suspended in air, the wheel paints a perfect depiction of the sphere with the four intersecting lines being the cardinal points of the universe.

The choice of colors applied to the wheel varies from culture to culture. However, the predominantly used colors are red, black, white and yellow. Some Native American cultures of course do not stick to these colors and may make alterations. For example, blue, pink or green may be used in the place of color black.

The meaning of the symbol is based on the analogy that life goes on and on as though in circular movements. The symbol, in this respect, represents the manner in which life infinitely goes round and round without end. Besides, the circle itself is taken to refer to the concepts of continuity of life, the sun, the moon and even the idea of consciousness.

The four points, previously identified to refer to the four Cardinal points ( West, East, North and South), may refer to the four seasons (Summer Autumn, Winter, Spring), the four phases of time in a given day (Sunrise, Noon, Sunset, Midnight), or even the four basic elements of life (Wind, Water, Fire, Earth). It is interesting that the interpretation of the point seems to so easily define realities in phases of four. Others opine that the four points refer to the four important ceremonial plants (Tobacco, cedar, sage and sweet grass) used heavily by these groups, among others.

New age proponents have argued, albeit in altruistic renderings, that the Earth Medicine Wheel can be used as a tool for personal enhancement and development. This perception visibly diverts from that of the Native Americans and other groups which favour and advance the doctrine that the wheel occasions more of communal good rather than individualistic.

In conclusion, it is essential to properly identify the groups of people who perceive the symbol as being important in order to understand the variations in usage of the symbol. This also explains the possible variations in color of the symbol from one culture to another. The bottom line, however, is the idea that just as life goes on and on as in a circular manner, so is the depiction of the Earth Medicine Wheel.