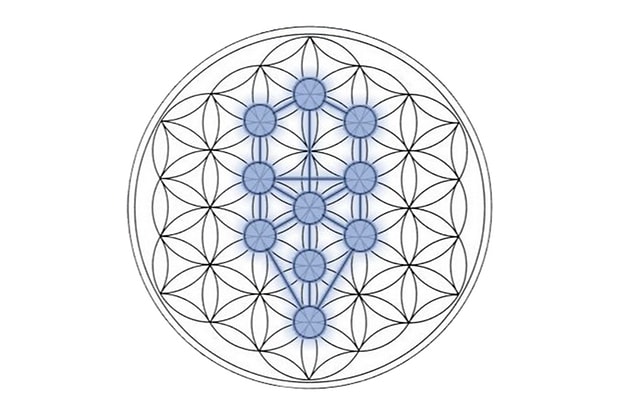 This symbol is basically a geometric rendering of repetitive and overlapping circles. The circles in this context have the same radius and are drawn on a two dimension surface. The symbol bespeaks of the great works and patterns of creation by the Creator. The pattern came about as the need to fill the ‘Great Void’ was overwhelming.

It I speculated that the creation pattern followed a specific and consistent path. For instance, the Seed of Life was created first. Afterwards, some vortex kind of creative motion had been set up in earnest. The next structure to be created was the egg of life. This structure is reminiscent of the very basis music. Ostensibly, as is the distance between full and half tones is in music, so is the distance between spheres. Similarly, it bears significant resemblance to a cellular division that is in the third stage. The resulting and emerging scenario after the egg of life creation is the development of the human body. At the same time, all energy systems emerge at this point and so is the justification for the creation of Merkaba. The continued development of more circles (spheres) leads to the emergence of the Flower of life symbol.

Interestingly, there exists a secret formation of thirteen circles that can be derived from the flower of life pattern. It is said that this is the source of all existence. It is the very fruit of life. The circles each stand for the 13 informational systems which in turn stand for varying aspects of reality. The thirteen circles are considered the basis of creation and that every living creature derives existence from them.

In Egypt, the use of the flower of life symbol can be evidenced from ancient religious art and artifacts. For instance, at the temple of Osiris located at Abydos, one of the oldest Flower of Life symbols can be found. The symbol is drawn in red ochre and is very faint- an indication of the wearing off over the years. David furlong commendably justifies why the argument that the symbol may have been drawn after the downfall of the Ptolemaic Dynasty. The symbol may have been used, as the eye of Ra, to represent the supreme power of the Egyptian rulers— the Pharaoh.

Similarly, the symbol may have been used among the Phoenicians, Indians, Assyrians and other Eastern civilizations for representations such as of deities, spiritual symbolism, among others. Muslims, on the other hand, have extensively used the symbol majorly for purposes of decoration. However, the symbol can be observed on Islamic geometric patterns with six or twice as many pointed stars. The style employed in developing these patterns, called the girih, is evident on most Islamic artwork bearing the symbol.

The uses of the Flower of Life symbol in the modern day have increased, especially with the association of the symbol with New Age Symbolism. As a result, many lines of fashion, jewelry and decorations on diverse backgrounds are increasingly becoming accommodative to the symbol. New Age proponents and users have grown accustomed to using tattoos of the symbol to propagate the symbolism of the Symbol in relation to the agenda of the New Age Movement.

Some wedding rings have been designed on basis of this sign. Besides, the use of the symbol in music is gradually gaining ground. The cover of the album Sempiternal (2013) contains the Flower of Life symbol depicted in an array of 61 circles. The album, ‘A Head Full of Dreams’ equally uses heavy flower of life symbolism, although on a lesser scale. This album, by Coldplay, uses an imprint of the symbol but with 19 overlapping circles (spheres).

Whether or not this uses have any bearing on the music industry (in terms of a message perhaps?) remains to be seen. What is evident is the fact that the flow of life symbol is not getting phased out. It is widely being adopted for use in fashion, design and manufacture of jewelry, dress ware, decorations and even tattoos. Could this be an indication that the deep and rich symbolism associated with the symbol is gaining acceptance on an unprecedented worldwide scale?