The Six Most Popular Tarot Card Decks: Which Deck Is Right for You? 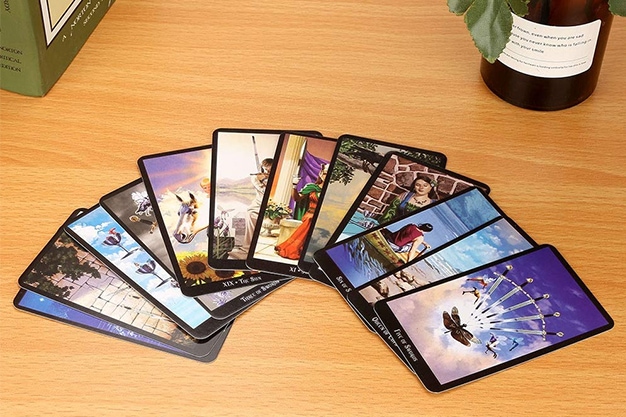 From a very early age, I have been fascinated with tarot readings, and I was given a Rider-Waite deck by a dear friend that set me on the path to where I am today. Since then, the Rider-Waite has continued to be my favorite deck. For those of you who are wondering how to choose a tarot deck and are still unsure which is right for you, here’s a short list of what I believe are the seven most popular tarot decks. 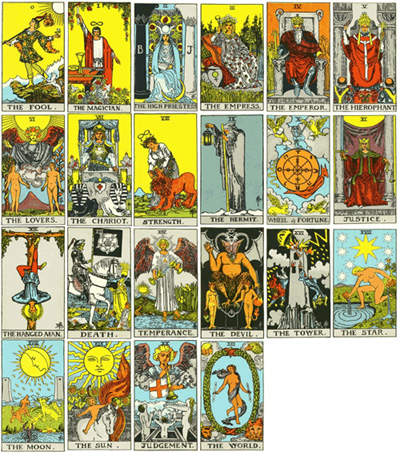 This is the most popular tarot deck circulating in the Western world. It’s a classic tarot deck with timeless images that are hundreds of years old, but still look contemporary in the present day. The imagery of this deck feeds the zealous readers’ curiosity. All credit goes to illustrator Pamela Colman Smith and the mystic instructions of A.E. Waite.

Originally published in 1910, the Rider-Waite deck is also known by a number of other names, including Rider-Waite-Smith (RWS), Waite-Smith, Waite-Colman-Smith, or simply the Rider deck.

This deck’s popularity has even led it to appear in places such as the James Bond movie Live and Let Die and Madonna’s video backdrop for her Re-Invention World Tour.

Other than the fact that it has significant sentimental value to me, the main reason I love this deck is that it is not just one of the most popular tarot decks but also one of the oldest. The Rider-Waite deck remains closest to the original tradition and still holds deep and powerful symbolism. 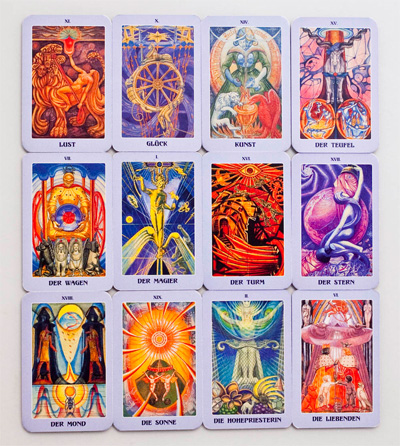 Painted by Lady Frieda Harris from the instructions of famous occultist Aleister Crowley, this divinatory deck has gone through several reprintings, as both Crowley and Harris are very meticulous. In this 78-card deck, practices such as magic, astrology, alchemy, numerology, and gematria are well-illustrated and condensed.

I find it really complex at first, perhaps because of its blazing metaphysical intensity. But the longer I look at the Thoth cards, the easier this deck is to read, as its archetypal symbols portray the potential meaning of each in special, infinite variations. 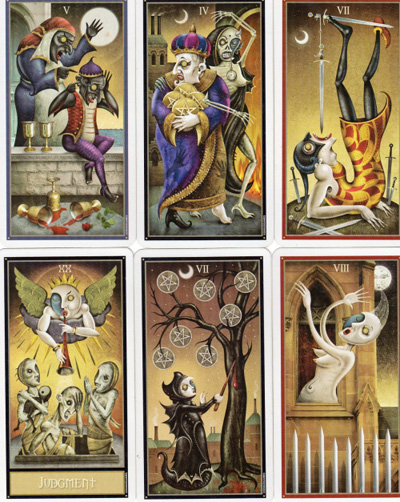 From The Fool to the King of Pentacles, storybook illustrator Patrick Valenza artistically embodied strong imagery. It still surprises me that he hand-painted the Major Arcana cards when he was 15. That says a lot about the development and depth of this deck’s design. The narrative and organic approach to this tarot deck paves the way for beginners to easily express their readings.

If you scan this deck’s cards, you’ll find that there is a lot going on with the representations and maybe agree with me that they are a little creepy, but the imagination is so intense that even beginners will find it up-front yet refreshing.

4. Legacy of the Divine 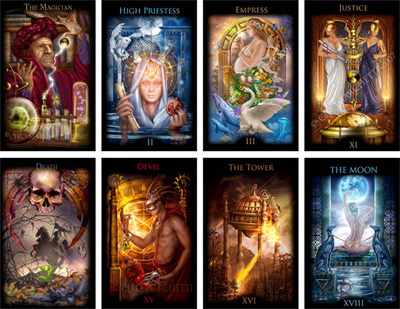 With vibrant, richly colorful, and captivating artwork by digital artist Ciro Marchetti, this is one of the popular decks that you would surely want to have design-wise and vision-wise. This deck is inspired by the Rider-Waite tradition: modern, visually appealing, fresh, and intuitive. This deck comes with a guidebook in which Marchetti’s thoughts on the cards are carefully presented. 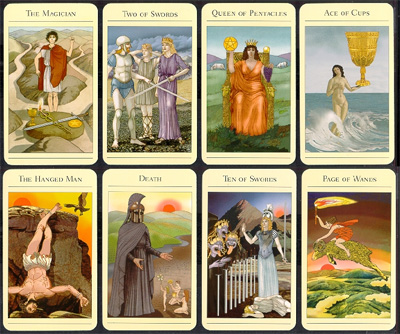 The original version, the Mythic Tarot by Tricia Newell, was published in 1986. This ancient Greece-themed deck was re-illustrated by artists Liz Greene and Giovanni Caselli in 2011. Like the RWS, it is well-detailed and ideal for novice readers. The Major Arcana begins with The Fool, and the final card is The World. Within are cards depicting the journey of life in archetypal characters. Basically, it is tarot-reading your life through Greek mythology. When you order the New Mythic deck, it also has a comprehensive guidebook in which the psychology of the cards is offered.

6. Wheel of the Year

The title of the deck itself generally speaks of Earth and its four seasons, the cycle of life. In my honest opinion, this one for me has the most vivid imagery, rich in symbolism about nature’s wisdom. It cleverly fits in traditional meanings and themes. Creators Antonella Platano and Maria Caratti used vibrant watercolor imagery to support all earth elements. This deck incorporates pagan practices and all of the celebrations and holidays that we know today. Any novice or expert reader will find this deck really charming and multidimensional.

There is no standard deck that fits everyone. Researching may help a lot in your selection, but honestly, when it comes to how to choose a tarot deck, the answer can be as simple as a personal connection. How do you feel about that deck you’ve been eying? Does the energy it gives you feel right? Are you looking to buy a starter deck, or are you an expert reader? There are several variables. If you are a novice, a Rider-Waite deck is likely to suit you because it is easy to interpret. If you are an advanced reader, then you are free to go for a deck that is a little more complex than usual.

The best way to select the most appropriate deck for you is to consider your reading level, the card size that you can shuffle comfortably, the cardboard quality, reviews, the cards’ imagery and symbolism, your objectives, and, of course, your real purpose.

Personally, I still prefer my Rider-Waite deck. How about you? What deck suits you best?