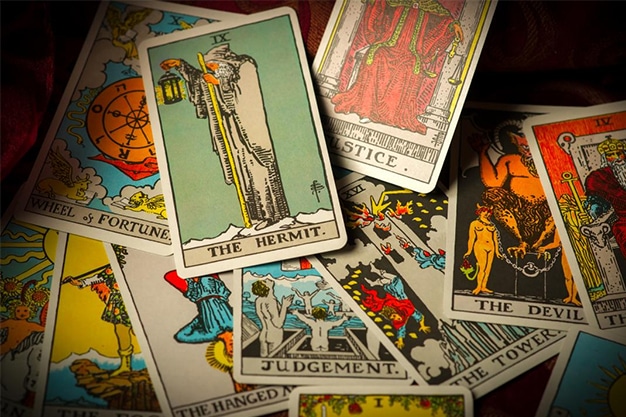 Even if you aren’t into the art of divination or fortune telling, chances are you’ve probably heard of Tarot or have seen people handling a strange deck of cards. In its most basic form, the art of Tarot is using a special deck of cards to read someone’s future, provide insight into their past, or help steer someone toward their right path. The art of reading Tarot is often shrouded in mystery, myths, and misconceptions. This article will do its best to shed some light on the truth about Tarot card reading.

Each deck of Tarot consists of 78 different cards. The cards are split into two categories: the Major Arcana and the Minor Arcana. There are 22 Major Arcana cards and 56 Minor Arcana Cards. The Major Arcana cards represent the larger events in our lives; they provide an overall spiritual meaning. The Minor Arcana cards represent the more practical aspects of our lives and show us the things that happen in our day to day. Each individual card has its own meaning and interpretation. Although there is a structure or suggested meanings assigned to Tarot cards, ultimately the readings of the cards is up to the individual Tarot reader and their interpretation may differ from another readers.

Contrary to popular belief, Tarot cards aren’t quite as old as people think. Although they have been around for centuries, their first appearance happened sometime between 1420 and 1440 in norther Italy. This early iteration of Tarot cards was not what it has evolved into. These early cards known as “triumph” cards were used for playing card games similar to Bridge. Although there is some evidence that people used these playing cards for casual divination or predictions, the art of cartomancy (using cards for divination) didn’t rise in popularity until the 18th century.

These early triumph card decks are the basis for the Minor Arcana of today’s Tarot cards. They had the suits cups, coins, swords, and polo sticks (which would later become wands). They also had a court consisting of a king and two male underlings. As these cards evolved into Tarot, Queens, Trumps, and The Fool were added.

The True Purpose of Tarot Cards

As has already been stated, Tarot cards are used for divination. The art of reading Tarot is a type of cartomancy or fortune telling using cards. Although this is the basic use of tarot cards, they can be used for so much more. Going to a Tarot card reader isn’t just about having your future read. A Tarot card reader can help you answer any of your burning questions, help you see your past and present more insightfully, help you reflect on your behavior, and really anything that you can think of.

A common misconception about Tarot readings is that they will help you change your life overnight. While the Tarot cards might provide insight or present you with options about your future, a reading is only there to provide guidance. If you want things in your life to change, you have to actually act on the advice that your Tarot reader is giving you.

Another big myth surrounding Tarot is that it is a tool used for evil. While there might be images and cards that some people find scary like Death or The Hanged Man, reading Tarot is not wrong, sinful, or evil. The art of reading Tarot is just that, an art or a skill that uses cards and divination to help people. People may also have a fear of seeing their true nature’s being revealed when certain “ominous” cards show up. However, Tarot is nothing to fear and you should see your Tarot reading as a way to reveal personal truths and insights you might be denying.

The meaning of Tarot is something that is very personal to the individual. Some people believe that it will help them predict their future, while others use it when they are facing a time of crisis. No matter what you use Tarot for, the cards and their reader will have the answers that you are looking for.
The Tarot is a powerful oracle for immediate answers to your questions. When you’re ready to delve deeper into the world of Tarot, get your free 3-card reading tailored to your specific needs, no strings attached. Your personal reading will shed insights on your past, present, and future.