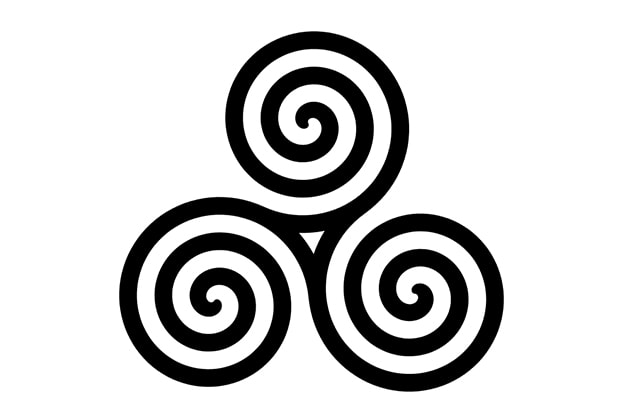 The term triskele (triple spiral) is derived from a Greek word which means three-legged. The (Triskele) is a pre-Celtic, and Celtic symbols found in some sites in Neolithic and Irish Mesolithic backdated in the Neolithic period. The artwork came as a result of access to the writing work in Europe. The spirals are the representation of religious beliefs and bearing other symbol meanings. The most famous ancient spirals are in Newgrange, Ireland. Newgrange is one of the largest constructions out of earth and stone. The spiral of Newgrange has been influential to date hence bearing different interpretations. Many people have associated spirals as a representation of a cycle of rebirth (mother of the goddess) hence interpreted as wombs symbol.

The origin of Spirals

The triple spiral (Triskele) is a pre-Celtic and Celtic symbols found in some sites in Neolithic and Irish Mesolithic. The spirals took different forms with the earliest ones having curved on pre-Celtic stone moments and modern ones found in the Celtic Christian Illuminated manuscripts. The triple spiral is believed to be the precursor to the latest triskele design in the papers.

During the 5th century, AD, as Christianity came to Ireland, the spiral (Trickle) to a new meaning dimensional thereby treated as a sign of Trinity. The symbol is used to-date as a beautiful sign of faith among Christian of Celtic descent in the globe.

The triple spiral is the primary symbol of Celtic Reconstruction Paganism, representing three realms –Land, sky, and sea. Besides, the spiral was associated with as the feminine in nature hence mother of the goddess.

Spirals are the most prolific signs in the Celtic symbology, as a myriad of the old artwork. There are importance and meaning about the spiral from the Celtic world of art. The spirals is a used as a symbol of spirituality, change, quintessence and growth (Rebirth)

The spirals are symbols representing paths leading from the outer individual consciousness to the inner being (soul). These external beings include the eternal awareness, materialism ego, and perceptions. On the other hand, the inner souls bear the enlightenment, cosmic awareness, and the unseen essence. For instance, during the 5th century, the Christian church in Ireland adopted the triskele symbol a teaching tool for the Holy Trinity (God- the Father, the Son, and the Holy Spirit.

The spiral symbol is considered to be a representation of the nature of consciousness starting from the center (core) thereby expanding in the outward directions. For stance, life of human beings begins by the sperm cell meeting ovum which will grow to become a fetus, baby, and finally mature person. According to the mystics, this is the way of how things come into existence.

In the natural world, changes in life are as a result of life cycles. For instance, the old dies to give room for the younger generations which is spirally represented. The spiral, therefore, is a sign of change and development rather than stagnation. The changes that occur are treated to be good and healthy for individual wellbeing. Finally, the spiral acts as a tool of learning by explaining the significance of change hence easy adoption.

According to the Western ideology, there are five composition elements of the around life. These are water, air, spirit, air, and earth. Some cultures refer as spiral as because there is no standard spirit symbol. Normally, the circles are the universal spiritual symbols, but spirals also do apply.

Most often, the spirals have also been seen as water symbols. The symbolism is evidence the fact that water is mutable. Also, the waters also ripple in circles. Finally, water and soil (Earth) being treated as feminine due to their ability to experience increases and supports the surrounding.

Summary of the spiral symbols