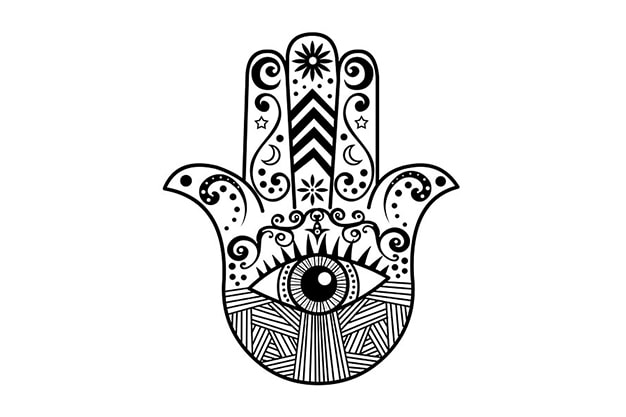 The Hamsa is a hand- shaped apotropaic amulet used to supposedly ward off potential dangers from envious lots as well as the evil eye. Its usage is common both in Jewish and Islamic contexts. This article explores the origin of the symbol, its symbolism and usage in various contextual renderings.

The very word Hamsa refers to the five digits on the hand like amulet. As indicated, the amulet is widely used in both Jewish and Islamic communities. It follows, naturally, that both communities have names for the same symbol. In Islam, for example, the amulet is called the Hand of Fatima– in direct reference to the daughter of Mohammed. In the Jewish culture, it is called the Hand of Miriam.

The Egyptian Mano Pantea has also been postulated to have historical links to the Hamsa. However, this was regarded as the Two Fingers symbol which was also basically an amulet. The representation drawn form that amulet has to do with the two fingers standing for Isis and Osiris. The thumb, on the other hand, represents Horus, their son. It is speculated that it was used by both Isis and Osiris in warding off potential danger from their son.

Finally, the Jewish origins of the symbol has been said to have been borrowed from the Islamic use of the symbol. The fingers point to the idea that people ought to use their five senses in rendering the praises due to God. Further, the available Kabbalistic manuscripts point to the use of the Hamsa amulet in extensive religious works of the Jews.

The symbol, as has been explained previously, is used in protection. Logically, to protect one against the evil eye, the Hamsa is often designed with an eye. In the modern day, some Jews prefer to use the symbol on ceramic wall plagues. These often further used in conjunction with a Jewish prayer right at the middle of the palm. This is said to have the capability to forestall not only the gaze and effects of the evil eye, but also protect against natural disasters such as earthquakes.

Similar designs and portrayals of the symbol are also evident in Egypt. The hand plagues, in this case, bear the appearance of the original motifs but cast on tortoise-glazed pottery. The idea for such designs is similar. In other Egyptian uses, a Hamsa may be designed as a metal key. In the palm of symbol is engraved some blue glass picturesque of an eye. This design doubles up the symbol as being both a Hamsa and an eye-in-hand.

Algerians, on the other hand, are famed for using the symbol as an official emblem. To a certain degree, the widespread use of the symbol may be associated with Islamic beliefs. However, the basic persuasion for the continued use of the symbol remains protection.

In many cultures and nations, the widespread use of the Hamsa may point to the tendency to associate it with trendy but, at the same time, secular talisman. This has endeared populations from diverse backgrounds to the use of the symbol on their jewelry, decorations post and key cards. From the Israelis to the Islamic nations across the world, the basic allure of the symbol remains to be to protect victims against potential harm from the villainous evil eye.