Everything You Need to Know About the Llewellyn Tarot Deck 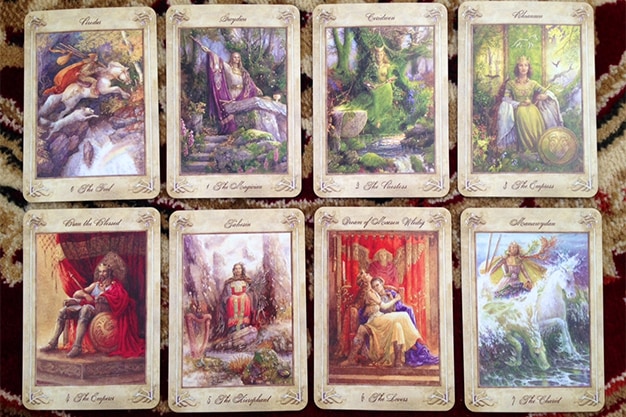 There have been many variations on the popular Rider-Waite Tarot deck throughout the years. One of the most successful modern takes on the deck is the Llewellyn Tarot by Anne-Marie Ferguson. The Tarot deck, which was created for Tarot publishing house Llewellyn, follows the same structure as the Rider-Waite deck but is based on the Celtic mythology of Wales. The cards are beautifully illustrated with images of figures from Celtic myths and legends. The Llewellyn Tarot was published in 2006 and in the past decade since it first debuted, it has risen in use and popularity.

Like most Tarot decks, the Llewellyn Tarot consists of 78 cards. The 22 cards of the Major Arcana depict images of mythological Celtic figures. The cards of the Minor Arcana are similar to the ones in the Rider-Waite deck with only a few variations. The cards come with a comprehensive guidebook that not only introduces the basics of Tarot, but also includes the Welsh folklore that the cards are based on.

Anne-Marie Ferguson, the artist and author of the Llewellyn cards and its companion book, has a deep understanding of the Tarot. In order to prepare for this deck, she did extensive research into the Celtic mythology, folklore, and legends of Wales. This isn’t Ferguson’s first published Tarot deck. In her early twenties, she illustrated another Tarot deck, Legend the Arthurian Tarot, and wrote its companion book A Keeper of Words. This deck was based on the legends of King Arthur.

Since the theme of the Llewellyn Tarot is Celtic mythology, Ferguson swapped out the traditional figures of the Rider-Waite cards for figures from Welsh history and mythology. For example, instead of The Fool, there is Peredur (or Percivale, which means “pure fool”), a knight from Arthurian Legends. The High Priestess is Ceridwen, “goddess of the witches”. The Hermit is the Welsh druid Myrddin. The Justice card is depicted as The Lady of the Fountain. The cards of the Llewellyn Tarot go on to change all the Major Arcana cards to fit the Celtic theme. Also included in the guidebook, is a pronunciation key for all of the Welsh names.

The History of the Llewellyn Tarot

According to Anne-Marie Ferguson, “Even in the bright light of our modern age, the country of Wales retains its air of mystery.” This meant that Celtic mythology was the perfect inspiration for a modern Tarot deck. Wales is the home of Myrddin, whose life inspired the tales of Merlin. It is also home to Taliesin, a great bard from the Heroic Age whose poetry has survived over a thousand years. Llewellyn George, the founder of Llewellyn publishing, was also from Wales. Llewellyn came to America in the early 1900s and established Llewellyn Publications. Over a century later, the current house of Llewellyn decided that they needed a flagship title that would bear their founder’s name. Naturally, they decided to commission a deck that would be based on Celtic mythology as a way to honor Llewellyn George.

One of Anne-Marie Ferguson’s wishes in creating the types of Tarot decks that she does is that she see them as a great way to keep lesser known tales alive. Although Ferguson had always turned down the opportunity to create another Tarot deck, she couldn’t say no to the chance of preserving Welsh legacy. It took her many years to complete the deck, with Major Arcana alone taking about three years to complete. While the Major Arcana cards are elaborate and unique, she kept the Minor Arcana cards simple and based them off the Rider-Waite cards. This makes the deck a great choice for beginners.

A lot of Ferguson’s source material came from the history of Wales, its landscapes, folklore, and Celtic mythology. She sourced medieval poems and epic myths for some of the cards. However, most of the inspiration for the Major Arcana cards comes from a famous collection of medieval tales called the Mabinogion.

Ferguson says that the medieval Welsh instinct was to live within the reach of the supernatural. She calls this mystic realism and cites it as one of the reasons why Celtic literature is so appealing. This blending of realism with the supernatural was the perfect fit for Tarot. To quote Ferguson on the subject, “It is not fantasy, but organic reality, seen on occasion through an imaginative, poetic lens—the same way we experience the tarot.”

The Llewellyn Tarot deck is a modern deck that still manages to capture the mystical magic of older Tarot decks like the Rider-Waite version. It is a great starter deck that is beautifully illustrated with Celtic Welsh imagery. This modern deck with an old romantic feel would make a great part of any Tarot enthusiast’s collection.

Although I don’t use the Llewellyn Tarot, I appreciate its beauty and unique interpretations. Request a free 3-card reading from me today if you are ready to receive my interpretations of the Tarot. Your personal, no strings attached, reading will reveal insights into your past, present, and future.