There is unassailable evidence that dreams have been extensively used in popular culture. Federico Fellini aptly captures this:

“Talking about dreams is like talking about movies, since the cinema uses the language of dreams; years can pass in a second and you can hop from one place to another. It’s a language made of image. And in the real cinema, every object and every light means something, as in a dream.”

Like the known suppositions of Freud, modern popular culture has deeply embraced the dream phenomena. Often, this is explored along the lines of fear and anxiety as being part of what comes out of the unconscious when one is asleep. In this regard, the preference to use dreams in pop culture emanates from the primal patterns of human perception which persuasively result in more influence than would be conventionally achieved. 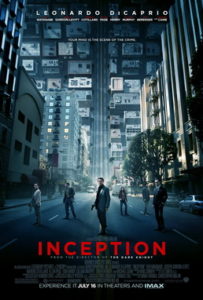 Inception is basically a science fiction film. Starring Leonardo DiCaprio as Dom Cobb, a professional thief in a complex web of advanced espionage, he goes about his thefts by sneaking through the subconscious of his victims. In the current seemingly impossible undertaking, Cobb has a chance of a lifetime on his hands. He’s charged with the duty of implanting another individual’s idea into the subconscious of another— the victim. The process of infiltration and implanting is done through an elaborate military procedure that creates a shared dream world. This is the inception.

Here, a Japanese trader, Saito, wants Cobb to infiltrate and convince Robert— Heir and son to Fisher— to wind up his father company. In return, Cobb is promised to be cleared of a murder charge. A series of several treacherous shared dream levels are created to achieve the desired result.

In the Inception, the idea of shared dreams gives one the rare chance of accessing another person’s unconscious for individual benefit. The film’s plot meanders through several shared dream levels. The result is a framework in real or dream world extrapolates into each other— but under some control. The control is in the hand of the protagonist who must extract vital clues from their victims in dreams. 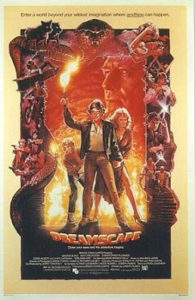 This film depicts a full-color dream that amplifies the growing trend in mainstream film and movies which inadvertently confirms the longstanding moniker of Hollywood as entirely apropos. In the film, initially preposterous suggestions are actualized and a psychic is recruited in order to infiltrate the dreams of other people including those of the President of the United States. The surreal nature dreams in this context would most likely create safe escape passages. This means, it will be considered a mere dream when in actual sense, espionage or intelligence has been gathered— notwithstanding the counter intuitive nature of the approach. 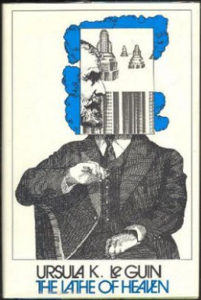 Written by Ursula K. LeGuin, this award winning novel’s plot revolves around a book character with a strange attribute: his dreams can alter reality!

George Orr, a draftsman, abuses drugs to create a perpetuated false reality apart from the real impoverished and deplorable reality in Portland, Oregon. When placed under psychiatric attention, he, together with William Haber explores the unheard of frontiers of dreams being used to alter reality. Using the Augmentor, newer dream realities are created that bear no resemblance to the tattered existing realities, with George even falling in love and marrying a lawyer named Heather in one reality.

In the end, the series of dreams designed to develop new realities result in a better and saved world. Sadly, there are older realities still exists as shrapnel and an ensuring scenario leaves Haber with a broken mind. Heather, on the other hand, is presumed to be in her right frame of mind ad back to her ‘real’ self. However, she hardly remembers George.

The fleeting nature of dreams has been likened to films/ movies. Perhaps this explains the widespread use of dreams, in their various renderings, in films. Whereas the usage of some dreams in films is symbolic, in some contexts, the application can be simply plain. Some of the dreams used in movies portray possible realities of dreams altering realities or simply wielding significant influence on mankind. Other dreams, however, like the inception questions what is real and what fantasy is. These are much akin to speculative fiction where the actual line between reality and dreams may virtually be nonexistent.

For a much detailed treatise on dream interpretation and why dreams are gaining much attention in popular culture, contact Sophia Loren, your favorite Tarot Prophet today.