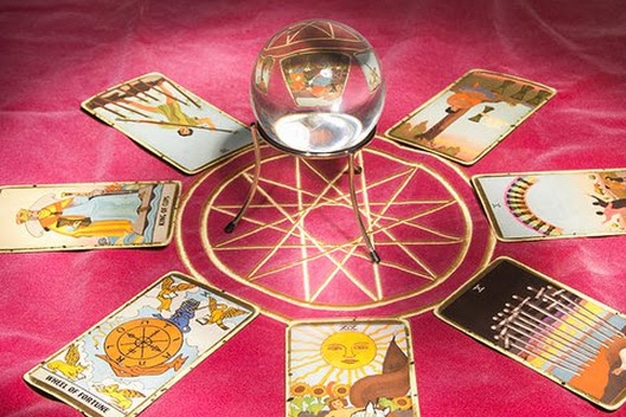 The use of tarot cards and crystal balls have been popular ancient divination activities from the medieval period to the present. Behind these materials are strong metaphysical properties and imagery that indirectly expresses important ideas and states of mind concerning life aspects.

As an experienced reader for decades, I never doubted their power. I always see them as mystical chattels imbued with great wisdom, healing, and cleansing. Before I get into how a crystal ball and tarot cards are used together, let me first define what each one of them is.

This sphere is an ancient symbol of infinity, wholeness, and harmony. With its shape reflecting that of our world, this crystal is believed to be spiritually connected to our nature, and crystal ball readings can bring into the open a unison of clearer thinking, integrity, and invigoration.

Crystal balls are transparent by nature. They are said to have already existed way before the Celtic tribes and the rise of Christianity. A crystal ball is made of beryl, which medieval clairvoyants called “the energy stone.”

Throughout my journey, I normally deal with skeptics. Most of them associate crystal ball readings with a hustle of some sort or a marketing ploy, but little do they know that every single element in this world emanates powerful energies, often unnoticed, and crystal balls are one of them.

It’s been said that tarot cards originally came from Italy and originated as a game called “tarocchi,” though that claim has been debated. Legend says that some of the first cards were hand-painted for Charles VI of France’s amusement.

Regardless of where it really started, the use of tarot reading today is considered to be a conduit for change and grace. It serves as a reminder of how one should see through their life, but the stirring effects don’t end there. The Catholics condemned its use, but poets and artists were immensely inspired by its existence.

And I know its significance well. Everyone I know of who has decided to free their mind, consult the cards, and respond in the right way, following the guidance well, has seen improvements in their life in general.

How Do a Crystal Ball and Tarot Cards Work Together?

Professional readers often use a crystal ball alongside tarot cards. Using a crystal ball, tarot readers can gain another level of insight: You see the spirit realm through the crystal sphere, and the tarot cards access the basic elements in a person’s life, such as their emotional, physical, mental, and spiritual levels. The interpretation is a combination of both.

There is no formula for reading, either with or without a crystal ball. Tarot reading only requires improved senses and endless performance and observation.

Even without the crystal ball, tarot cards alone are just as powerful in opening the realm of the future and unveiling life’s mysteries.

Want to see what lies in your near future? I’ll give you insights on things you don’t know about yourself, the people around you, your environment, and your potential. It’s absolutely free! Click here to request your free online three-card reading today.