What Is the Difference Between Angel Cards and Tarot Cards? 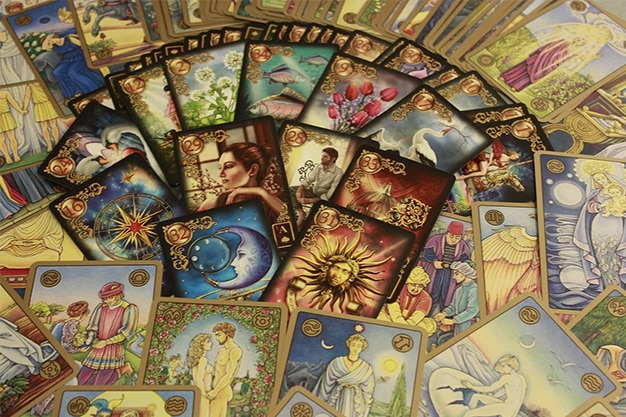 Working with Tarot cards requires a vast amount of experience before someone can interpret them with accuracy. Although there are some Tarot decks that are relatively easy to read, in general Tarot cards are more complex than Angel cards and require a fair amount of time to understand and interpret. In a nutshell, Angel cards are detailed messages in words that can be used in a general reading, whereas Tarot cards yield in-depth detail about one’s particular situation.

What are Angel Cards?

Angel cards are a type of Oracle cards. They com in various sizes and shapes. An Angel card deck can consist of various numbers of cards, there is no set standard. The cards themselves may have images as well as messages on them. They can be whatever the person who made them wants them to be. They are generally filled with messages of hope, love and joy.

Unlike Tarot cards which usually follow a set format, a set number of cards with a Major and Minor Arcana in each full deck, Angel cards are a ‘soft’ version of divination that sends loving messages from the Angels above.

Many Tarot readers see this as a bunch of hoodlum and prefer the hard-hitting, in depth, often brutal readings afforded by traditional Tarot. But it’s all up for debate.

An Angel card reading, on the other hand, is often considered free-form, with either phrases with accompanying images or stand-alone phrases. An Angel card reading can even be a reading that involves only images. Angel cards are also a lot nicer that Tarot cards. Tarot cards deal with both positive and negative attributes and situations, while Angel cards, at worst, give positive affirmations that things will get better. They offer a guiding light in every case and never predict an outright deleterious scenario. It’s a bit “sunshine and roses” for some, but other, more sensitive psychics who become anxiously easily enjoy the safety and harmless nature of Angel cards.

Understanding Angel Cards and How to Effectively Use Them

As the name implies, Angel cards are composed of inspirational phrases and words that provide a comprehensive meaning believed to be messages from the Angels. These messages aim to inspire, heal, guide, and comfort a person who is going through a difficult time. Learning to read Angel cards can be a little less intimidating than studying Tarot cards, since they do not require special training for interpretation. The words of guidance from Angel cards are not only applicable to any age group, but are all uplifting and stir our emotions positively. They can be a great introduction the the art of divination, especially for younger people or those that are dubious of the demons that may lurk in the traditional Tarot decks. They are in fact a favorite among the highly religious. Even though Tarot cards found their roots in religion, they have since built up quite a reputation as a means of witchcraft and sorcery.

When preparing to use Angel cards the reader is advised to do a prayer, instead of a meditation (which some also view as a way for evil to enter your mind). Reading the cards requires the reader to simply ask a question before choosing a card at random. If they feel that the card’s answer speaks to them, then it is thought that the card and the message are directly from the Angels.

Some Angel card decks offer more in depth spreads and some people have even used Tarot spreads in an Angel card reading, although this can be a bit of a monotone reading, especially with the larger spreads that require more cards, because the Angel cards all carry the same basic message. But again, they are a great introduction into the card-reading world. Some Tarot readers often pair a deck of Angel cards with their Tarot deck for some extra guidance when difficult situations arise in a reading. This way they can ask the Angels for guidance instead of relying n their own whims.

You can procure Angel cards from bookshops, crystal stores, and even online, but before you order a pack of cards, pay particular attention to the cover image and notice if you feel a personal connection with it. This will shed light on the overall character of the pack and will reveal the pack’s overall connection with you. Much the same as with Tarot cards, the more you connect with a deck of Angel cards the better your reading will be.

Also, try to do some research and take a look at the format the cards are printed in. Are there images or just words? Does the deck cme as part of a box-set with an accompanying guidebook to help you get to know the cards and what they mean? Do you like the way the author looks? Do they sound like your kind of person or are they too much for you? This last point is especially important when it comes to Angel cards as they are a freeform type of Oracle card and their interpretations are entirely up to the author, so if you cannot stand the way the cards are interpreted it won’t matter how much you love the look of the deck. Lastly, look at the number of cards in the deck. The larger the deck the bigger the variety of spread you can do.

There are also some Angel cards that are based on traditional Tarot decks, like these:

This may be a best of both for you if you like the idea of the fullness of a Tarot reading, but don’t want it to be as harsh as a traditional reading.