A Guide to Tarot Card Decks 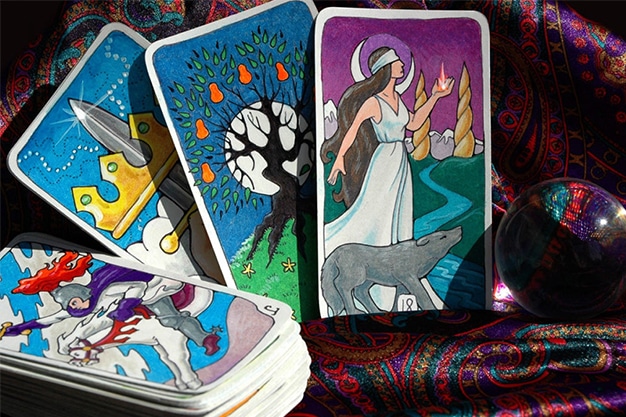 Most commonly, tarot is viewed as a divination tool. The origins of tarot cards remain a mystery though it is known that they were used in fifteenth century Italy. The wealthy had beautiful decks commissioned, some of which are still in existence today. During the eighteenth and nineteenth centuries, tarot cards were discovered by a number of occult scholars who revealed the true history of tarot. These scholars were able to connect the cards to alchemy, Egyptian mysteries, the Kabbalah, Hermetic philosophy, and other mystical systems. Even though tarot is rooted in the occult, the cards have become more popular in the last several decades and now include many different perspectives.

There are many different types of tarot card decks that can be purchased. Different decks will feature varying artwork with some of the different types of decks including angel oracle, mythic, rider waite, druid craft, and more. A standard tarot deck includes 78 cards divided into the major arcana, and minor arcana.

The major arcana cards are typically considered as a unit. Various schemes have been developed to show how patterns are formed with the cards that cast light on the human condition. Often, astrology, numerology, and similar esoteric sciences play a role in the schemes. Many people who interpret tarot cards consider the major arcana to show the different stages of a person’s journey of inner growth.

There are 56 minor arcana cards which are divided into four suits including Swords, Cups, Pentacles, and Wands. Each suit represents a particular approach to life. The minor arcana cards are meant to show how the themes of the major arcana operate in daily events. Cards in the minor arcana represent the activities, emotions, and concerns that make up the drama of everyday life.

Each of the four minor arcana suits have distinct qualities of their own. Tarot readings will show how the energies of the different suits are impacting your life on a daily basis. The suits of a tarot card deck are structured similarly to playing cards with aces, middle cards, tens, and court cards.

In addition to different types of tarot card decks, there are also different methods for reading tarot cards include question readings and open readings.